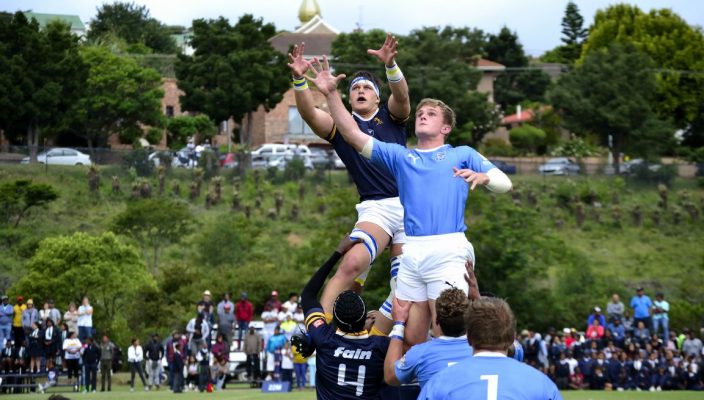 GREY High capitalised on their opportunities in ruthless fashion to run out comfortable 34-5 victors over Graeme College in the 20th Pam Golding Properties Graeme Rugby Day in Grahamstown on Saturday (March 24).

The result in the day’s feature game capped another excellent festival of schoolboy rugby, with thousands of spectators surrounding the Somerset field to witness a series of well-contested matches.

Besides Grey’s solid performance, Brandwag were impressive in overpowering Queen’s College 43-27, while St Andrew’s College and Selborne College were both pushed hard by Marlow Agricultural and Hudson Park High respectively.

Kingswood also gave a spirited performance against Framesby before going down 22-13.

After an early penalty by LJ du Preez, Grey took a 13-0 lead into the break with tries by Du Preez and Ryan Adams.

Although they dominated territorially, it was a workmanlike rather than a dominant performance and Graeme lifted the home spirits when Dylan Rielly crossed for a try early in the second half to make it 13-5.

However, Grey were able to spend most of the time in their opponents’ half and this led to the home side often trying moves which were fraught with danger.

Twice the PE team were able to score tries through a Matthew Easton interception and a strong run by big lock Dumisa Ngcivana when Graeme coughed up possession. With Du Preez adding the conversions, the lead was stretched to 27-5.

Graeme defended courageously throughout the match, but Grey’s ability to maintain pressure when on attack told in the end. It allowed Ngcivana to add another try and Du Preez completed the scoring with his third conversion.

Brandwag’s attacking instincts and strong forward play set up their win over Queen’s after a closely contested first half in which the Uitenhage side led 17-15.

They took control after the break with two tries to lead 31-15 and although the Queenians never gave up the fight, each time they hit back, Brandwag found the extra gear to maintain the 16-point gap.

St Andrew’s were given a tough examination by Hudson Park and led only 8-7 at the interval. They then watched the East London side take the lead 14-8 before the pressure created by their attacking intent resulted in two more tries to give them a hard-earned 22-14 win.

Kingswood were looking down the barrel early in the second half against the organised Framesby outfit, trailing 19-3, but showed great spirit to have the better of the second half.

A highlight was the remarkable solo effort by fullback Jarred Marnus, who fielded a kick on his own 10-metre line and then bamboozled multiple defenders to race through for a superb try.

Kingswood added a second try to close the gap to 19-13, but Framesby held firm and kicked a penalty to create a buffer the Grahamstown side could not close.

Marlow showed plenty of courage to keep Selborne on their toes, but the East London side controlled enough of the match to win 27-18, while Dale were similarly extended by a gutsy Nico Malan side.

The Kingwilliamstown side were up 14-0 in no time but were eventually forced to hang on for a 14-13 win.

Similarly, Union High held on for a 17-14 win over Cambridge, while Pearson had too much in the tank for the brave Muir outfit, taking the day’s opening match 34-19.