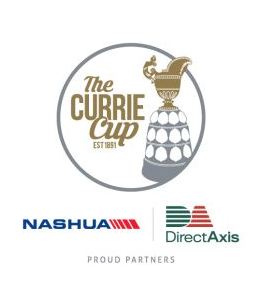 It was a rewarding day for the Down Touch Griffons at Profert Olën Park in Potchefstroom on Friday as their senior team were crowned the Currie Cup First Division champions and their U20 side the SA Rugby U20 champions.

The Down Touch Griffons overpowered the Leopards 44-25 in the Currie Cup First Division final – brought to you by DirectAxis and Nashua – as they put their bodies on the line on defence and used their point-scoring chances effectively. The defeat for the Leopards marked their first loss in 19 matches and denied them from winning back-to-back titles.

Unfortunately for the hosts, two yellow cards and several unforced errors at crucial times contributed to their demise.

The Griffons U20 team, meanwhile, defended like demons to shut out Boland in the dying minutes in a thrilling SA Rugby U20 Championship Final for a 22-16 victory.

The Leopards, opened up the scoring in the Currie Cup First Division Final with a penalty goal in the second minute, but the Down Touch Griffons hit back with a try by flyhalf George Whitehead in the ninth minute thanks to their patience on attack, which pushed them 7-3 ahead.

Whitehead extended their lead to 10-3 with a penalty goal in the 25th minute following a competitive spell by both teams.

The Leopards broke through for their first try of the match in the 27th minute following three earlier unsuccessful attempts to cross the tryline compliments of a well-timed pass to centre Adriaan Vermeulen, but the unsuccessful conversion left them trailing 10-8.

Both teams added a penalty goal in the next 10 minutes, but the Down Touch Griffons had the final say in the half as fullback Selvyn Davids used his raw pace to round off the team’s second try following a break in the midfield to take a 20-11 lead going into halftime.

The Leopards struck first four minutes into the second half as fullback Jaco Hayward touched down in the corner to reduce the deficit to 20-18.

But they suffered a big blow 10 minutes into the half as captain and No 8 Jeandre Rudolph received a yellow card for infringing at a ruck, which allowed the Griffons to slot over another penalty goal for a 23-18 lead.

They built on this with a fantastic try by centre Tertius Kruger in the 60th minute, after he snuck through a gap in the defence to push the team 30-18 ahead.

The Leopards were dealt another blow 10 minutes before the final whistle as flyhalf Gene Willemse was yellow carded after a dangerous tackle, which resulted in a penalty try for the visitors and handed them a comfortable 37-18 lead.

The Leopards kept alive their hopes of a victory with a try by centre Johan Deysel in the 36th minute despite having 14 men on the field, but Kruger’s second try after snatching the ball out of the air and dashing through the defence sealed a 44-25 victory for the Welkom side. The try for Deysel, who also added two penalty goals and two conversions, earned him a personal total of 15 points in the match.

The match was particularly memorable for Whitehead, whose try, five conversions and three penalty goals, earned him 27 of his team’s 44 points and the man-of-the-match award.

In the SA Rugby Under-20 Championship Final, five penalty goals by Griffons winger Jeandre Christian, who also converted his team’s only try against Boland, handed the Welkom side the edge as they held on for a 22-16 victory. The Griffons forced their way into a 16-0 lead in the first half thanks to three penalty goals and a try by flanker Gift Dlamini.

But Boland staged a strong fightback after the break as replacement back Keagan Fortune slotted over three penalty goals to add to a try by No 8 Colin April, which left the teams tied at 16-16 with 14 minutes to play. Two more penalty goals by Christian, however, pushed the Griffons 22-16 ahead with four minutes left on the clock. The dying minutes were gripping as Boland worked their way close to the tryline, but they were denied by the effective defence, which sealed the victory for the Griffons.