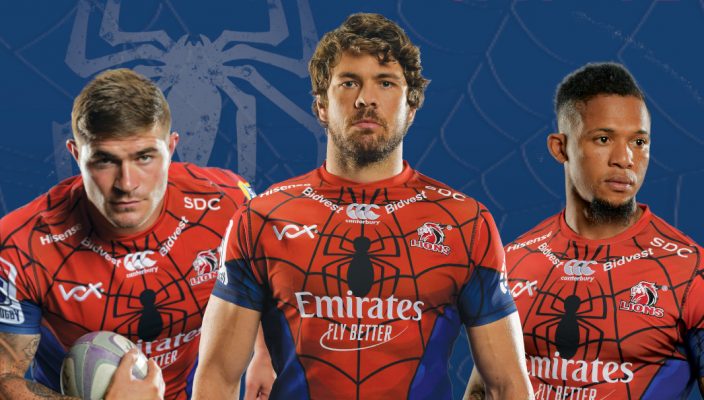 Jan 15 • General News, Super Rugby, Super Rugby News • 5595 Views • No Comments on HERO-ON-HERO COMBAT HAS MOVED FROM THE SCREEN TO THE RUGBY FIELD

Get your Spider-Man suit ready – Marvel is coming to South Africa in a big way as a plethora of superheroes get ready to invade Cape Town on Sunday 3 February for #SuperHeroSunday.

This Vodacom Super Rugby season the Emirates Lions will become Spider-Man, arguably the most popular superhero of all, and just like the comic character, they will don an even more advanced Superhero costume.

We identify with heroes as if they were sports teams – well now they are!

On this day it will be the first time the teams will officially don the new-look jerseys, which will also be worn during other SA derbies throughout the Super Rugby season.

The Emirates Lions (Spider-Man) kick off proceedings at 14:00 against the Cell C Sharks (Black Panther) followed by the DHL Stormers (Thor) versus the Vodacom Bulls (Captain America).

The idea of our heroes fighting, sparks our imaginations, our rooting interests, and our emotional investment. Expectations are that the season’s first hit-out – powered by DStv, SuperSport, Marvel and Vodacom – will be fast and spectacular as teams try and establish solid early form.

There will be an emphasis on entertainment, with families encouraged to dress up as their favourite super heroes, and the day will be packed with activations and assorted giveaways and prizes.

Tickets, from R50 (or four from R150), are available at Computicket, while corporate hospitality can be arranged viawww.circa.co.za

There will be no ticket sales at the stadium on match day.