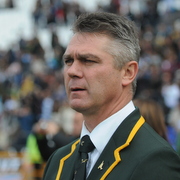 Springbok coach Heyneke Meyer said his team’s inability to adapt to the rainy conditions in the second half of their Rugby World Cup semi-final cost them dearly despite delivering a heroic semi-final performance against New Zealand.

The defending champions advanced to their fourth final when they beat the Springboks by 20-18 in a pulsating match played at Twickenham in London on Saturday afternoon. The South Africans were in front by 12-7 at the break.

All the Boks’ points came via penalty goals – five by Handre Pollard and one by Pat Lambie. The All Blacks scored two tries – by Jerome Kaino and Beauden Barrett – while Dan Carter added two conversions, a penalty goal and a drop goal.

“I thought we had a perfect first half – we executed well, our discipline was great and we built scoreboard pressure,” said Meyer.

“But I don’t think we adapted well to the rainy conditions in the second half, while they did and kept us pinned back in our own half.

“We made some mistakes and in the end that was the difference between winning and losing. Credit to the All Blacks, they are a classy team and kept us out when it mattered most.

“However, I am still proud of this team. After we lost to Japan in the opening round, very few people gave us any chance to come this far.

“But coming close and losing will never be good enough for me as the coach of the Springboks. We had a chance and we didn’t take it. We should have been in the final and I will never settle for second – to lose by one point or by 50 remains the same.

“Probably the most pleasing was to see how our youngsters matured under the guidance of a strong leadership group. Many of these young players will be around for the next World Cup and they will only get better.

“They will be the (Dan) Carters of tomorrow and will become world beaters. That makes me really excited for the future of rugby in South Africa.”

Springbok vice-captain Schalk Burger said: “We created opportunities and there was never going to be a lot in it, but we came up two points short. I have seen this movie before and it’s horrible. Unfortunately for us New Zealand were just a little bit better today.”