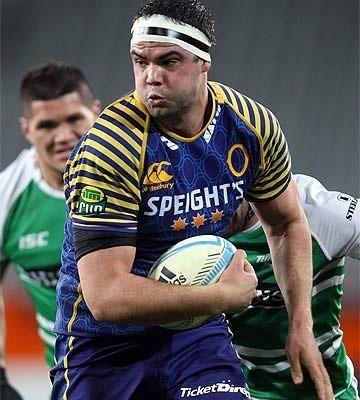 The Highlanders have announced today that local Otago forwards Gareth Evans and Tom Franklin have signed with the franchise, and also that livewire Halfback Fumiaki Tanaka has recommitted to the Highlanders for the 2014 season.

Highlanders’ Head Coach, Jamie Joseph, commented that these players have been in great form this season for Otago in the ITM Cup and signing Tom and Gareth would add some youth and
excitement to the squad for next season.

“Fumi has added some real energy to the team this year. He offers a different style of play to Aaron Smith, so it’s pleasing that we have been able to keep him at the Highlanders for next season”

Evans made his debut for Otago in 2011 against North Harbour and has played 30 first class games for the Union. Frankin also made his debut in 2011 for Otago and has played 21 first class games. Both players have been involved in the Highlanders’ training sessions during the year and played in the Highlanders’ Development team in the Pacific Nations Cup.

Highlanders General Manager, Roger Clark, has been pleased with the progress made so far in the player recruitment process.

“It’s great to sign Gareth and Tom for two years and Fumi for next season. The 2014 player recruitment process has been going well and our squad has a young and hungry look for the coming season”

The Highlanders’ squad will be announced at the end of October.

Note: Gareth and Tom have both signed two year contracts with the Highlanders. Fumi has re-signed on a one year deal.