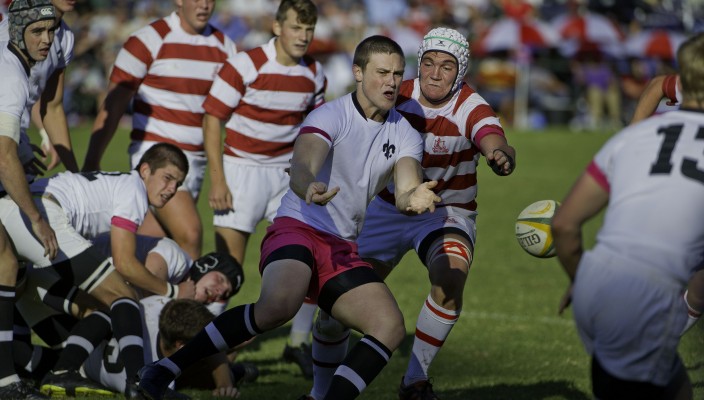 On a beautiful day for rugby and in front of a packed Gilfillian the Hilton College 1st XV produced there best display of the year.

Hilton scored the first points of the half through a Cameron Wright penalty and this was quickly followed up by a Tristian Blewett touchdown where he burst through a tackle from 10 metres out.

The Hilton forwards were winning the collisions and this allowed Cameron Wright to sell a dummy from a ruck and step his way to a try under the poles. Both tries were converted by Wright and Hilton went into half time 17-0 up.

In the 2nd half MHS came out determined to change the momentum of the game and won a few penalties but the Hilton defence hold firm and with the loose forwards stealing a few turnovers on the ground it wasn’t long before a sweeping move by the Hilton forwards and backs culminated in a great try by lock, Christian Wiessing.

MHS eventually got on the scoreboard when there lock latched on to a intercept pass from 60 metres out and showed a fantastic turn of pace to score under the posts. Wright kicked another penalty before Hiltons next try had an element of luck about it as a dropped MHS ball bounced into the hands of Ariel Garcoa who raced away to score.

MHS scored their 2nd try after their loose forward beat a couple of Hilton defenders.

Hiltons final try scored by Matthew Dickerson was after some good work by Mark Gunn and the Hilton forwards. This brought a close to an entertaining game won 42-12 by Hilton.

On a warm balmy Saturday afternoon on a packed Gilfillan field ( apprx 8000 people) the first of the Hilton- Michaelhouse clashes took place .  It was a wonderful occasion and celebration of fine school rugby from the u14D till the 1st XV.

In total 20 rugby matches were played in wonderful spirit which epitomise what school boy sport is, and should be about.

On the day in the 1st XV match Hilton were worthy winners.  Part of the day was an initiative by two Hilton boys, Michael Salgado (Head of School) and Matt Holding, were each boy wore a pink armband in support of PinkDrive for breast cancer awareness.

All the boys also had pink ribbons on their blazers to support this fine cause.  Many of the spectators also showed their support by wearing pink! 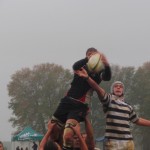 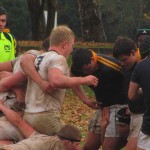 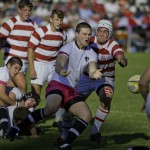 Please email your school 1st XV Match report along with other results & pictures (smaller than 1MB size) to media@schoolrugby.co.za so we can post on www.rugby15.co.za