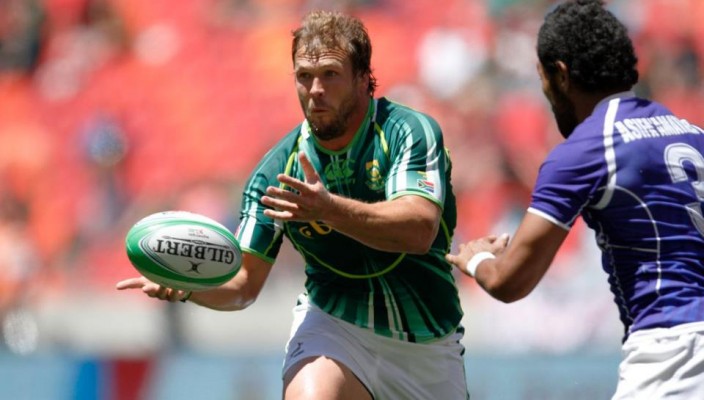 The skipper will reach the landmark when he leads his team onto the field at the iconic Twickenham Stadium, the venue for the Marriott London Sevens, the ninth and final tournament of the 2012/2013 series.

The fact that Horne has appeared in succession makes the achievement even more special for “Frank the Tank”, who debuted for his country in 2007, although Springbok Sevens coach Paul Treu remembers that time well.

“When Frankie first came into Sevens I told him he won’t make it and that he should go back to the 15-man code. As with every other player I told him it was up to him how he accepted this. But rather than giving up he embraced the challenge and it fantastic to see how far he has come,” Treu recalled.

“The fact that he is the only player in the world to achieve this shows how remarkable the achievement is. It’s amazing for his career and it shows how he has put his body on the line. Coming into the Glasgow and London tournaments he had a lot of niggles so we have had to manage him carefully. In Tokyo I think he trained once during the week so he could play,” Treu revealed.

The team lost four members of the squad that won the Glasgow Sevens last weekend and Treu is very relieved that Horne was not one of them.

“He is a fighter and our go-to man and I have the utmost respect for him as a player and a person. Sevens has become his life. I really love Sevens and if I am the number one fan of the sport, he is certainly right behind me in second place,” Treu said.

Horne has won no less than 10 tournaments with the BlitzBokke and was a member of the 2008/09 squad that won the HSBC Sevens World Series for the first time.

“It is certainly very humbling to be able to reach 50 tournaments and I would like to thank everyone who walked this road with me.” said Horne. “One cannot be successful without the backing of your loved ones, team mates and team structures. This tournament is not about me though. We are in a unique position to win four tournaments in a series for the first time ever and that is where the focus is for the weekend,” Horne said.

There will be no time for slip-ups as only 12 teams play for the Cup, with South Africa in pool A alongside Australia, France and USA.

The team suffered some injuries following their Glasgow victory, with Paul Delport and Steven Hunt unfit due to a knee injury and an ankle ligament strain. The youthful duo of Justin Geduld and Seabelo Senatla also had to return to South Africa to re-join the Junior Springboks’ squad preparing for the IRB Junior World Championships starting in France later this month.

The return of Cecil Afrika as one of the four replacements will be welcomed, while Bernado Botha and Tshotsho Mbovane has tasted victory with the squad before. Werner Kok will make his debut for his country.

Treu admitted that Afrika could be rusty and that his call-up had more to do with the Rugby Sevens World Cup in Moscow at the end of June.

“We need to get Cecil match fit for Moscow after his knee injury, so will have to manage him well this weekend. We will need to find our feet early in the tournament if we want to be successful this weekend. It will not be easy as the players had a long and hard series, but they have shown their resilience and character already.”

The Springbok Sevens match schedule on day one is (SA times).

Audio clips of Frankie Horne being interviewed in Afrikaans and English are available at the links below: