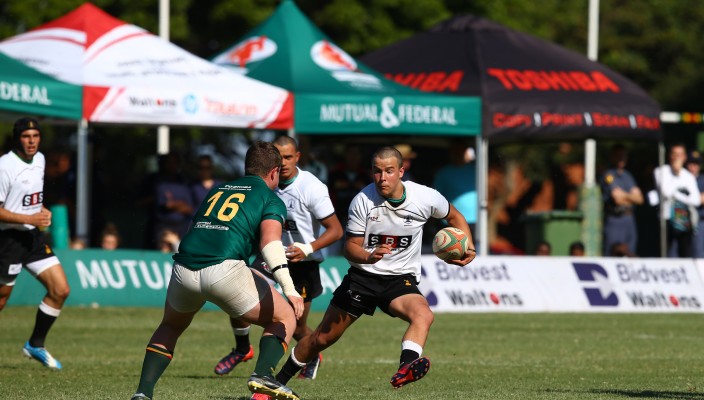 Hosts Go Down Fighting At Dixons

On an emotional day in Durban, Glenwood lost out to Gauteng powerhouse Hoërskool Monument (Monnas). It was a game overshadowed by the recent death of Glenwood’s second team hooker Tristan Stewart in a car accident, making for a sombre atmosphere at Dixons.

On the field, it was always going to be difficult to contain a Monnas team boasting 11 Craven Week players. The match started at a frantic pace with both sides willing to run with ball in hand, but numerous handling errors and turnovers spoiled any chance of building momentum towards the try line.

In the seventh minute, though, Monnas centre Elmar du Plessis spotted a gap and raced down the right hand touchline. He couldn’t find winger Odwa Nkunjana, who was in support, but he did pick out scrumhalf Jacques Joubert, who crossed in the corner for the opening try. Flyhalf Xander Kruger converted to boost the visitors’ early advantage.

Fullback Jerome Bossr and wing GJ Lubbe both had good runs for Glenwood, but the former missed a potentially game-changing three penalties. A home attack was then turned over and Joubert spotted a huge gap in the Glenwood midfield. He raced up the middle and, after a 70 metre charge, went in under the sticks with not so much as a hand being laid on him. Kruger converted and it was 14-0 to Monnas after 22 minutes.

On the stroke of half-time Bossr finally slotted through a penalty to put Glenwood on the board. Their momentum continued after the break with a couple of chances. After good interplay between Bossr and left wing Devon Brough, they were denied a certain try by a knock-on.

Minutes later Bossr was again stopped just short of the line by a desperate tackle that bundled him into touch. Glenwood were beginning to feel it was not going to be their day.

Bossr did, however, deny Nkunjana a try when he tackled him into touch metres from the line. Monnas continued to press and after a good break from 8th man Len Massyn, Desbie Joubert set up replacement lock Goodman Mkhwanazi to score in the right corner. Again Kruger converted a difficult kick and with Monnas leading by 18 points after 50 minutes, the game seemed to be in the bag.

Glenwood again lost out when hooker Quinton Vorster went over, but only after putting a foot in touch. From a scrum inside the Monnas 22, 8th man Marco Palvie broke left and passed to Brough who went over in the corner. Martin Holtzhausen couldn’t convert and the score remained 21-8 with 15 minutes left on the clock.

Both defences held tight as time ran out to prevent any further points. Despite Glenwood giving their all, missed opportunities and fine margins cost them dearly in a game that Monnas ultimately deserved to win.