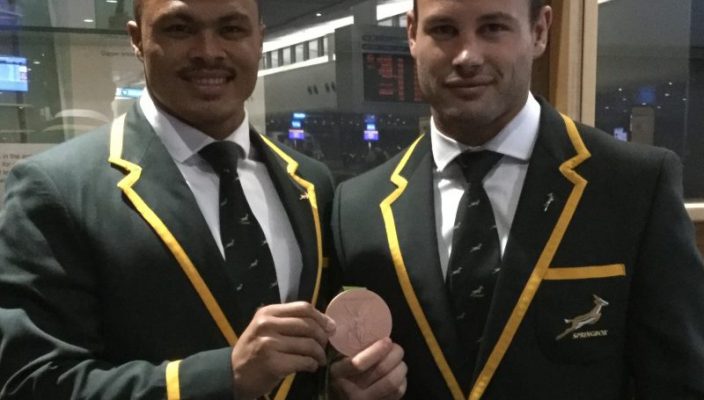 Springbok Francois Hougaard has been rewarded for the ultimate act of sportsmanship during South Africa’s Sevens campaign at the recent Olympic Games in Rio de Janeiro.

The 28-year-old was handed an unexpected surprise on Thursday when he received his own bronze medal after giving the one he won to injured team-mate Seabelo Senatla at the Olympics last month.

Hougaard was called up to join Team SA’s Rugby Sevens side for the final day’s play at the Games last month as a replacement to Senatla, who injured his wrist on day two of the three-day tournament.

The versatile Bok star played in the semi-final against Great Britain and the third-place play-off against Japan with Senatla in the stands. A couple of hours later, Hougaard was on the podium to receive one of the 12 medals given to the players.

As he departed for South Africa the next day, he insisted that Senatla, who played in all the tournaments leading up to the Games, should take the bronze medal, as he felt the winger deserved it more, being the stand-out player for the team all year. Hougaard then left Rio without a medal.

Thanks to some requests and work behind the scenes from Team SA and South African Sports Confederation and Olympic Committee (SASCOC) officials, Rugby Sevens Team Manager, Ashley Evert, as well as Hari Coelho, Medal Ceremonies Manager in Rio and Marjorie Enya, Competition Services Manager, an extra medal was found and dispatched to South Africa.

The medal was given to Hougaard, upon the Springbok touring squad’s assembly for the Rugby Championship matches in Brisbane and Christchurch, prior to departure to Australia.

Fellow Team SA bronze medalist and Springbok, Juan de Jongh, handed Hougaard his medal, much to the surprise of the player.

“This is a wonderful surprise and something I really didn’t expect,” said Hougaard.

“When I gave the medal toe Seabelo, I felt he deserved it more than I did, and I still feel so, but having played a part in Rio, I’m very grateful to have received this medal and I would like to thank everyone involved in making it possible.

“It’s something I will cherish for many years as one of the best moments of my rugby career.”