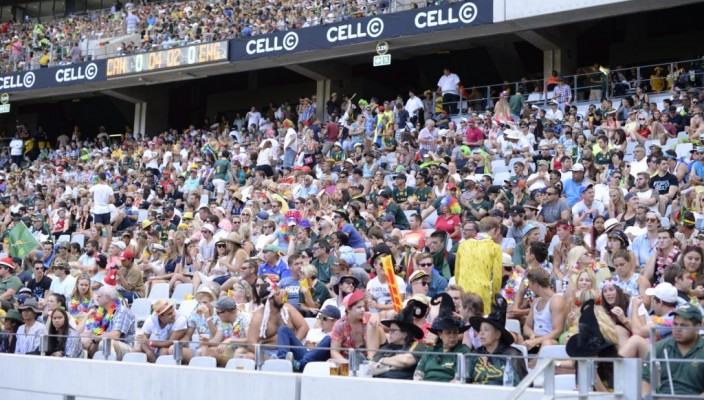 The inaugural HSBC Cape Town Sevens was declared a huge success by Jurie Roux, CEO of the South African Rugby Union (SARU), the two-day event drawing an official crowd of 105,900.

The Springbok Sevens were crowned champions on Sunday evening after two days of brilliant rugby by the world’s best Sevens players, making the second leg of the HSBC World Rugby Sevens Series in 2015/16 one to remember.

Supporters from as far afield as Germany, Sweden, Singapore and Brazil travelled to Cape Town this weekend to be part of this historic event. It was the biggest South African sevens tournament yet since the inception of the World Series in 1999.

“The rugby action was of the highest standard and we hosted an event which exceeded all our expectations, with the Blitzboks’ victory the cherry on top,” said Roux.

“When all the tickets were effectively sold out more than two weeks before the tournament, we knew it would be a great event. People talked about the Cape Town Sevens and the excitement was palpable on the weekend.

“There were some teething problems, all of which were sorted out as the tournament progressed. It’s not out of the ordinary for a big event in its first year such as this one, and we’ve learnt valuable lessons which will see an overall improvement for fans and participants alike in 2016.

“I would like to thank everyone from SARU and World Rugby who worked tirelessly to make this event a success, all the volunteers, sponsors and other stakeholder.

“But above all, I would like to thank every supporter who dressed up and brought heaps of ‘gees’to the Cape Town Stadium this weekend – you were as much part of the success as the teams.”

Apart from overall winners, the Blitzboks, Samoa won the Shield, Scotland walked away with the Bowl, and last week’s Dubai winners, Fiji, won the Plate.