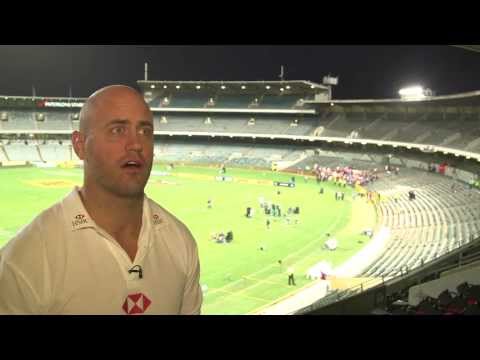 HSBC’s Lions Weekly, a video round up of the Australian view from the British & Irish Lions Tour.

:
The interviews give an Australian view of the three matches The Lions have played so far, and thoughts on stand out players at this stage of the Tour. Hear Nathan Sharpe reveal who he believes to be the best kicker in world rugby, as well as hearing how he regrets retiring from rugby and not facing The Lions. The world’s most capped rugby player George Gregan gives his predictions for the Series as well as his opinion on the spying accusations and alleged mind games currently being played between the two camps.

• Halfpenny one of world’s best kicker

• O’Connor should start at ten for all three tests

• Lions’ experience off the bench was key in Reds win

“After the Western Force game versus the Lions I think we can see they are a class team and they are fit.  They came home in the second half and they showed their class at the end of the day.

I think the backs, the big wingers, and centres all had good games.  Heaslip was outstanding and there is going to be a really good battle for the number 8 position within the Lions.”

On Warburton versus Croft:

“I think Sam Warburton is going to be in the team for the first test no doubt about that.  Tom Croft played well but I think the selectors would have looked at the make-up of that back row before they picked their captain and its good, you need competition right across the team and that’s a good thing for the Lions and there is plenty of quality in the back three of their scrum.“

“Leigh Halfpenny is one of the best kickers in world rugby.  I really like his technique.  It didn’t surprise me as he kicks really well for Wales and clearly if he’s in the test team you’d expect him to be the kicker.”

“The Wallabies build up (to the tests) is going to be great.  Those guys have played 15 rounds of Super Rugby, they’ll be match hardened and on the back of a couple of weeks of forced rest which I think is a great idea.  They are going to come into this series with plenty of energy, plenty of fizz and they will have been able to see a lot of what the Lions are trying to do”.

“In terms of the conundrum at number 10 for the Wallabies, Robbie has declared his hand pretty early on that he’s going to pick James O’Connor at least in the first test and he’s made that decision then he needs to stick with it for all three tests to give some continuity to the team and give some continuity to James.  If that’s the way he’s going to go its important he has confidence and backs that decision.”

On regretting his retirement:

On the Reds game:

“The game against the Queensland Reds was a really good test match type intensity.  A really good hit out and before half time it was tight with only one score between the teams, but in the second half they (the Lions) showed their composure and their experience. They used the bench really well.  Paul O’Connell and others came on and really lifted the team.”

“The Reds are a team which won the Super 15 two years ago and a team which is always aggressive and always attacking, and are positive and are really well structured.  They just had the attitude of wanting to attack and use the ball. Think it’s just the kind of hit out you want in the same venue as you are playing the first test against the Wallabies.”

On the Lions players:

“All have been playing really well. I am a big fan of Brian O’Driscoll. He is a bit younger than me but a similar sort of vintage, and it’s great to see him here and performing really well.   He, like the Lions, have stated they are here to win the Series and its shown in the way they performed and gone about their business.”

“Sexton’s been playing very well as a fly half. Farrell played well against the Reds as did Ben Youngs and we know what Mike Phillips can do.  They are all playing well and putting their hands up which will cause some headaches for the Lions selectors but that’s good.”

“In terms of the scandals (when the Lions tour here), and the media mind games, that happens anytime anyone tours here, especially from the Northern Hemisphere. Twelve years ago there was a lot of talk about spying, with Scott Johnson having publicly come out and said he was getting the lion out calls. There were also articles placed in the English media about Justin Harrison before one of the test matches, and how there was this angst amongst the players towards Graham Henry.  So there is always a bit of controversy and always talk and this is no different in terms of citings and spying.  In terms of spying I would actually be pleased to give someone our play sheet and say here are our calls, as at the end of the day they still have to stop it.  But it all builds up the theatre and the debate and passion.  The psyche of the Australians is that we like to put pressure on teams who come here and don’t want them to feel comfortable, but if they respond they get a lot of respect.  The Lions team are highly respected here in Oz but won’t be treated any differently.”

On predictions for the Series:

“My predictions for this Series are that I think its going to be 2-1 to Australia.  The Lions are going to go into the first test with a lot of confidence, and match play, and hardness, and combinations in place, which the Wallabies won’t have. Even though the Wallabies will have played together a lot, nothing beats a test match.  So I think the Lions, although I hope the Wallabies prove me wrong, might get us in Brisbane like 12 years ago.  But that Australia will bounce back in Melbourne and it will come down to the wire in Sydney.”