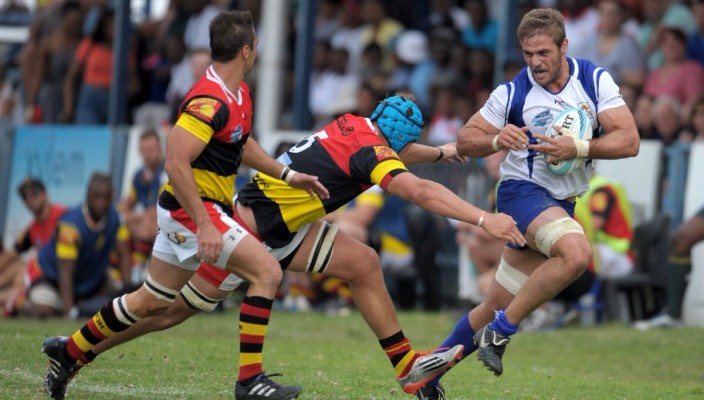 Defending Cell C Community Cup champions and tournament hosts Rustenburg Impala on Saturday booked their place in the final on Monday against Durbanville-Bellville as they secured a thrilling 21-18 victory against Hamiltons in the final semifinal at the Impala Rugby Club in Rustenburg.

The victory set up an all-Pool A final, and a repeat of the final-round group match won 24-10 by Durbell in Cape Town on 21 March. This will mark Durbell’s first appearance in a national final.

The second day’s play was thrilling as all the matches came down to the wire, but Rustenburg Impala, Durbell, Pretoria Police and Jonsson College Rovers made better use of their point-scoring chances, which saw them emerge victorious.

Hamiltons dominated the opening exchanges against hosts Impala, but their inability to capitalise on all their point-scoring chances and penalties conceded resulted in the teams entering the break tied on 6-6. Impala, however, found their rhythm in the second half and scored two well-worked tries, but two tries by Hamiltons saw the match come down to the wire with the hosts winning 21-18.

In the other semifinal, Durbell also used their point-scoring chances well in the first half against GAP Management Despatch as they scored two tries to one and slotted over two penalties to take the lead at the break. But GAP Management Despatch bounced back strongly in the second half to force the match down to the wire in the final minute as the teams found themselves exchanging penalties. Durbell, however, held on until the final minute to shut out Despatch 29-27.

Jonsson College Rovers, meanwhile, dominate territory and possession for most of their Plate semi-final against Vaseline Wanderers, which placed them on the front foot for most of the match, and they held on for the 24-19 victory.

In the other Plate semi, Wesbank’s opportunistic nature allowed them to dominate the first half against Pretoria Police, but they were forced onto the back-foot in the second half as Pretoria Police reverted to their structure and used their powerful forwards to stamp their authority upfront. With the team back on form they scored a last-gasp try to secure a 36-31 victory.

Jonsson College Rovers dominated the first half against Vaseline Wanderers thanks to a hat-trick by fullback Chris Jordaan in the first 26 minutes. Vaseline Wanderers, meanwhile, scored a try by Sifiso Mgaga which earned them their first points of the match. They had a golden opportunity to increase their try tally to two shortly before halftime, but a forward pass denied Kyle Dutton, who worked his way around four defenders to touch down. Jonsson College Rovers added a fourth try in the 35th minute thanks to a powerful rolling maul, which set Paul Bester up for a try.

Wanderers hit back in the second half with two tries to close the gap to 24-19 with six minutes left on the clock. They built on this momentum and had a fantastic opportunity to take the lead in the dying minutes with an attacking lineout five metres from their try-line. But again their lineouts let them down, which forced them to settle for a defeat.

Pretoria Police were made to work hard for their first points against Wesbank, but a strong rolling maul set them up for a try in the 13th minute compliments of scrumhalf Daron Liebenberg for a 7-0 lead. Wesbank, however, bounced back soon after with back-to-back tries by centre Sedwell Diedericks and wing Chrislyn van Schalkwyk and another in the dying minutes of the first half to take a 21-7 lead. They continued to fight until the final minute and earned the rewards with Van Schalkwyk intercepting the ball and then opting for a chip-and-chase to secure their fourth try of the match and an encouraging 28-7 lead.

Pretoria Police opened up the scoring in the second half with tries by Albertus Powell and Andries van der Nest, which allowed them to reduce the deficit to 28-17 and force their way back into the match. They built on this with another well-worked try by replacement back Wynand de Sousa, who stepped inside to catch the defence off-guard, leaving them only six points behind Wesbank. They fought until the death with Frederik van Deventer gathering a switch pass to cross the tryline for the winning try on the stroke of full-time.

GAP Management Despatch had the first say in their clash against Durbanville-Bellville with a try by Justin Peach in the first five minutes, but two tries by the Cape side compliments of hooker Renier Marais and Douw Wessels pushed them into the lead. Fullback Raymond Olivier added two penalties in the half to hand them a 20-7 lead at the break.

GAP Management Despatch lifted their intensity in the second half and retained possession, which allowed them to work their way close to Durbell’s tryline on several occasions. They also tightened up their defence which forced Durbell to settle for penalties to keep the scoreboard ticking. Despatch’s efforts paid off with Dumisani Meslane, Jaco Swanepoel and Lesley-Dean Luiters powering their way over the tryline to take a 24-23 lead with 14 minutes left on the clock. This was cancelled out by a penalty by GAP Management Despatch, but Durbell again snuck into a 29-27 lead with a little over a minute to play as Olivier slotted over another penalty. Despatch had a final chance to score with an attacking scrum five metres out, but a wayward pass denied them.

Hamiltons controlled the opening quarter against Rustenburg Impala as they dominated territory and possession. This earned them three shots at goal and two possible try-scoring chances, but they converted only one of the penalties to take a 3-0 lead. They were, however, reduced to 14 men minutes later as flank Jacques Oosthuizen was sent to the sin-bin for a deliberate knock-down. Impala capitalised on this to slot over a penalty and level the scores in the second quarter. Impala, however, fought back strongly and worked their way into Hamiltons’ half, and with the defence holding, flyhalf Cecil Dumond opted for a drop-goal for a 6-3 lead. But a long-range penalty for Hamiltons on the stroke of half-time levelled the scores.

Impala, however, forced their way into the lead with another penalty early in the second half and supported this with back-to-back tries by Aubrey McDonald and Mzivukile Duma to inflate their lead to 21-6 shortly before the fourth quarter. Hamilton’s hit back with a fantastic try by fullback Earl Lewis, who snatched the ball out of the air in plain sight of an opposition player with only 10 minutes on the clock. They added to this with a try by wing Iewan Bartels, who ran around the defence to come within range of a penalty to draw the match. But it was a case of too little too late as time ran out for the Cape side.