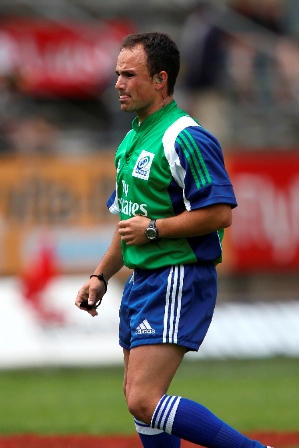 It is probably one of the most unforgiving jobs in the world and only a small group of individuals have been known to have the guts and determination to take up the whistle as a professional rugby referee.

Apart from 30 players on the field you also have millions of “experts” jumping up and down in the stands and at home, questioning each and every decision you make.

One of these individuals that decided to look past the criticism and insults, is young Jaco Peyper from Bloemfontein in the Free State. Peyper was kind enough to put down the whistle for a while and chat with Rugby15.co.za about what it entails to be a professional rugby referee.

At 30 years of age, Jaco Peyper is the youngest referee in Super Rugby, the Southern Hemisphere’s toughest and most demanding rugby tournament, that sees 15 teams from Australia, New Zealand and South Africa battling it out for the title of Super Champions.

Peyper started as provincial referee in 2006 and by 2008 he officiated in his first Super Rugby match. It was only in 2011 that he became a regular Super Rugby referee. He has in fact been officiating so well that SANZAR promoted him to their Referee Merit Panel. The panel consists of only 12 referees including some of the world’s top referees like Jonathan Kaplan and Chris Pollock. It’s an honour to be on such a distinguished panel and for Peyper it is even more special at such a young age.

Although Peyper has not officiated at the highest level of Test rugby yet, it is an almost certainty that he will be rewarded his first Test very soon. Maybe as soon as the 2011 Tri-Nations.

15: Firstly, congratulations with your promotion to the SANZAR Merit Panel. How important is this for you and your career?

Jaco: Very important. It’s all the clichés, hard work and a lot of luck as well. It adds a lot of credibility, which guys like Jonathan Kaplan have. There are two refereeing panels in the world. The SANZAR- and Heineken Panel, both comprising of ten referees each. So that places you somewhere in the top twenty referees in the world. It advances your future tremendously.

15: What made you decide to pick up the whistle?

Jaco: I’ve always been passionate about rugby and played at school level. I played for Grey, mainly for the Cherries and in Matric for the First XV. During my final two years I injured both my knees, which needed operating. At varsity I played for the Shimlas but my knees refused to play along and after the seventh operation I decided to hang up my boots. I considered getting into either coaching or refereeing to stay involved with the game and Oom Steve Strydom said to me “Jaco, why don’t you consider refereeing, seeing that you like helping the referee on the field”. The rest is history.

Jaco: I did all the courses and tests involved. I hadn’t even received my kit yet when I decided to go watch a Grey game and the appointed ref didn’t pitch for the game that day. A few people knew I was getting involved with refereeing and told me to blow the game. That was my very first game I did.

15: How excited are you at the thought of officiating your first Test match?

Jaco: It’s a very exciting thought. At the moment that is my medium to long term goal. If I’m good enough I’ll get to blow test rugby.

15: Being a scrumhalf yourself, can you tell us what it is with scrumhalves always chirping the ref?

Jaco: (Chuckles) As a scrumhalf you’re always right up and close to the action. You have the best view of the game and you’re always first to arrive at the breakdown. Scrumhalves will always be feisty, fox-terrier kind characters.

15: What fitness routine do you follow to stay fit and keep up with the players?

Jaco: A lot of cardio which involves a lot of running. It’s been estimated that a Super Rugby referee runs 9 to 10 kilometres per game. A referee must always be close to the action so it requires us to actually be as fit, if not fitter than the players. Three times a year we have to pass fitness tests conducted by SA Rugby. We have to do ‘Bleep Tests’ at 12.7, a 40 meter dash in 5.5 seconds and 180 shuttles to name a few. Coaches and players pick up when a referee is not fit and they will exploit it.

15: What is the biggest misconception fans have about referees?

15: How do we change that misconception?

Jaco: I don’t think it will ever change. It’s as much a part of rugby as anything else. The only thing a person can do is to try and educate the supporters a little more. A referee has to be stern and not everybody always likes that.

15: A lot of focus has been placed on the safety of players over that last few seasons, especially in tackle and ruck situations. How does this influence the way you blow a game?

Jaco: 48 hours before each and every game we have to present the refereeing panel with a game plan of how we’re going to ref the game. We need to know the teams and where we should focus on their infringements. Theses laws are always a balancing act. One game it will be very strict and the next it will be more lenient. These laws were put in place because South Africans in particular clean out the rucks harder than anybody else. Even when it gets done legally is gets done very hard.

15: Not many people know this, but you are an Attorney when you don’t have the whistle in hand. How do you combine the two careers and do they have any influence on one another?

Jaco: To me it’s always good to have a backup in case something happens and I won’t be able to ref any more. It’s also healthy for the mind to have something outside of rugby as well. It’s a family firm and my older brother is the boss and accommodates my refereeing. Our firm is involved with the Cheetahs and drawing up player contracts etc. I would never be able to do this without the support of my wife and my family.

15: What advice do you have for young and aspiring referees?

Jaco: Go for it. It’s a great way of staying involved in the game. The younger you start the better. Refereeing is a career now and takes you places. It’s also a career that last much longer than that of a player.

15: What is the weirdest/ funniest thing that ever happened to you the field?

Jaco: A couple of weeks ago I was blowing the game between the Waratahs and Chiefs in Sydney. The Tahs were awarded a penalty 5 meters from the Chief goal-line. They opted for the scrum and demolished the Chiefs. The Chiefs conceded another penalty and Phil Waugh said to me “Again mate”. The Tahs continued to destroyed the Chiefs in the scrum and the penalties kept coming and Phil Waugh kept saying “We’ll take another one mate”. Eventually I said to Phil “You’re not serious?” Not in those exact words thou. After 5 minutes of this I had no choice but to award the Waratahs with a penalty try.

Jaco: He is very performance driven and the mere fact that there are five South African refs on the SANZAR Merit Panel speaks for itself when it comes to the standard he expects. He will equip you with everything you need and you’ll also know if you made a mistake. You’ll get it from him 200%. He is one tough, tough nut.

15: The million dollar question. Who will win the 2011 Rugby World Cup? 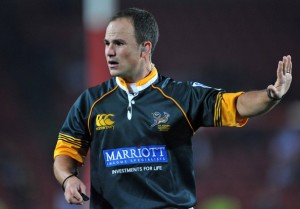