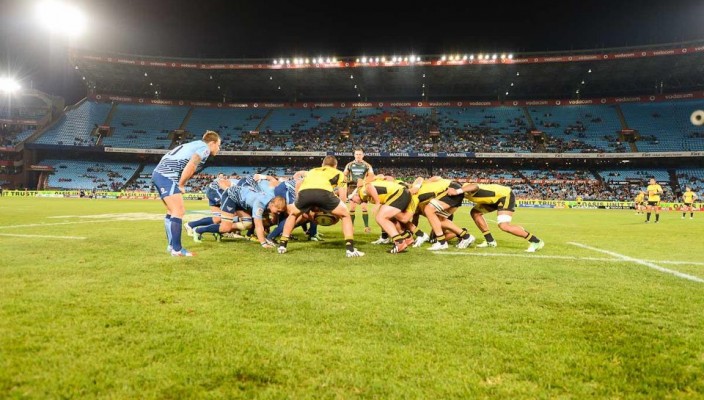 The International Rugby Board Council has announced the implementation of a global trial of the “crouch, bind, set” scrum engagement sequence, which is aimed at enhancing player welfare by reducing impact on engagement by up to 25 per cent in elite competition.

Approval of the sequence on player welfare grounds, is coupled with a call for Game-wide commitment from law-makers, match officials, coaches and players to ensure a fair and positive attitude is applied to deal with scrum issues facing the elite level of the Game.

Implementation will begin at the start of the next season in both hemispheres and follows extensive evaluation of the sequence during the recent IRB Pacific Rugby Cup, which indicated the possible delivery of a more stable platform leading to fewer resets and more successful scrums.

In a revision of the ‘crouch, touch, set’ engagement sequence currently being trialled, props will be expected to bind using their outside arm after the referee has called “bind” in the sequence.

The front rows will maintain the bind until the referee calls “set”. At that point, the two packs will engage.
The process was overseen and recommended to IRB Council by the specialist IRB Scrum Steering Group (featuring Union scrum experts) as a potential enhancement to the scrum mechanics after an extensive process of testing and analysis at all levels of the Game within the unprecedented IRB funded Scrum Forces Project run by the University of Bath in conjunction with the RFU.

Referees will be stricter

IRB Chairman Bernard Lapasset said: “The scrum is a fundamental and dynamic part of our Game. It is important that we continue to promote the best possible player welfare standards and this trial process is about putting players first and delivering a reduction of the forces on engagement at elite level, which could have significant positive effects on long-term player welfare.”

“The global implementation of this trial is a forward step, which will be subject to continual monitoring and evaluation. I would like to thank all Unions for their support and enthusiasm throughout this process.”

Coupled with the process, the IRB will instruct referees to ensure that the ball does not enter the tunnel unless the scrum is square and stationary and that a straight throw-in is strictly policed.

Lapasset added: “The implementation of the revised sequence alone is not about overcoming all the challenges of the elite scrum but it is a forward step. There is a collective responsibility for coaches, players and administrators to make the scrum a positive, fair and, above all, safe contest. Match officials will be stricter when refereeing the existing law.”

International Rugby Players’ Association Executive Director Rob Nichol said “It is our hope that through this trial, players and officials are able to implement the new sequence in a manner that maintains the scrum as a contest and central feature of the Game, delivers on improved short and long-term player safety and welfare objectives and goes some way towards eliminating the frustrations associated with resets. We appreciate the work undertaken by all involved to get the project to this stage.”

Positive move to improve the scrum

Scrum expert and Wales’ head coach for the upcoming tour to Japan, Robin McBryde, said: “We welcome the positive move to tackle the scrum, as it plays a significant part in the game, and must be preserved as a safe and fair contest. We look forward to getting to grips with the new sequence and playing our part in addressing the issues for a successful outcome.”

Chairman of the IRB Match Officials Selection Panel and Interim Chairman of the IRB Rugby Committee John Jeffrey said: “There is a collective responsibility to ensure the scrums are improved at elite level. Everyone must play their part and the referees are very much part of the solution.”

In collaboration with Member Unions and key stakeholders, a Game-wide educational process featuring coach and match official workshops will be rolled out ahead of the trial.

The five perspective Law changes currently being trialled and the trial change to television match official protocols will be considered by IRB Council at its annual meeting in 2014. This new scrum engagement trial will be before Council at its interim meeting the same year. As such, any amendments that are approved will be in place a year ahead of Rugby World Cup 2015.

‘Crouch, bind, set’ will be the call

A crouched position is the extension of the normal stance by bending the knees sufficiently to move into the engagement without a charge. A front row must not form at a distance from its opponents and rush against them or pull them. The sanction for ‘charging’ will be a penalty kick.

The research was based on two phases of examination under the University of Bath Scrum Forces Project: Phase one included six levels of the Game from international to under-18 with six teams at each level and six different engagement processes. The packs scrummaged with an instrumented scrum machine which measured the forces on engagement and the secondary shove post-engagement.

Phase two was live scrummaging with players in both front rows wearing pads which measured the forces on engagement. The results from the elite teams showed that, averaged across all teams, the ‘crouch, bind, set’ condition generated lower peak forces during the engagement phase, demonstrating a 25 per cent reduction compared with the ‘crouch, touch, set’ or ‘crouch, touch, pause, engage’ sequence.

The group is supported by Dr Grant Trewartha, Dr Mike England and Dr Keith Stokes, members of the University of Bath research team.