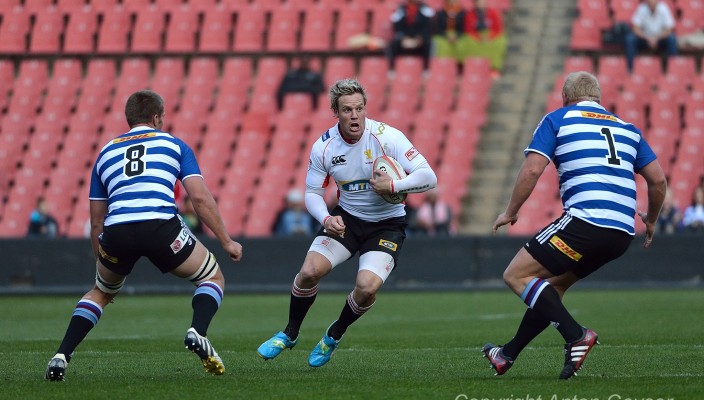 May 12 • General News, Vodacom Cup, Vodacom Cup News • 4267 Views • No Comments on It is a northern affair in Vodacom Cup final – Semi-finals Review

Four time winners MTN Golden Lions will play the Steval Pumas in the final of the Vodacom Cup in Nelspruit on May 18 after the Gauteng side knocked out defending champions DHL Western Province and the Mpumalanga side send the EP Kings packing in their respective semi-finals this weekend.

The Pumas secured their first ever final by winning 39-13 in Nelspruit, while five time finalists, the Golden Lions, proved too strong for WP in the second half and raced to a 44-25 win.

The two sides did meet in the Northern Section play a couple of weeks back in the Mbombela Stadium, with the visitors winning that one 23-14.

Carl Bezuidenhout kicked 24 points to lead the Steval Pumas into their first Vodacom Cup final in their history.

The flyhalf turned in a faultless kicking performance as he succeeded with five penalties, three conversions and a drop goal on route to his side’s 39-13 win over the EP Kings at the Mbombela Stadium in Nelspruit on Friday.

The home team were full value for their win as they ran in three tries to one. They had the better of the opening exchanges with their powerful defence snuffing out most of the Kings’ attacking ambitions. The hosts, who lost just one pool match on their way to their semifinal place, took a ninth minute lead when Bezuidenhout popped over a close-range drop goal.

The Pumas were proving to be the dominant team and three penalties from Bezuidenhout saw them stretch their lead to 12-0 after 27 minutes. The home team nabbed their first try five minutes later when left wing Rosco Speckman sprinted clear for a converted try.

The Kings, trailing by 19 points, were staring down the barrel but they managed to salvage something from a first-half when flank Mpho Mbiyozo was mauled over for a converted try with just two minutes left in the half.

Bezuidenhout and his opposite number Wesley Dunlop traded penalties after the restart to leave the score 22-10 in the Pumas’ favour after 55 minutes but Dunlop cut the deficit to just nine points with a 61st minute penalty.

However, just two minutes later, the Pumas squashed any hopes the Kings’ may have had of mounting a serious fightback when fullback Coenie van Wyk sniped over in the left-hand corner for a converted try.

Bezuidenhout then slotted his fifth penalty of the game before right wing JW Bell scored the try of the match when he set off on a jinking 25-metre run which resulted in a converted score.

A dominant second-half performance by the Golden Lions secured them a spot in the Vodacom Cup final after beating defending champions DHL Western Province 44-25 at Ellis Park in Johannesburg on Saturday.

The Golden Lions ran in six tries to two with the visitors kept in the game by the boot of flyhalf Kurt Coleman who succeeded with five penalties.

Boshoff and Coleman swapped early penalties but the hosts grabbed their first try, in the ninth minute, after their powerful forwards carried the ball deep into Province’s 22 which allowed outside centre Deon van Rensburg to slip over in the right-hand corner for a converted try.

Boshoff kicked a drop goal four minutes later before Coleman narrowed the gap with his second successful penalty of the contest,

However, the Lions were building up a head of steam and they extended their lead, in the 22nd minute, thanks to a superb try from right wing Deon Helberg who received the ball on Western Province’s 10-metre line before jinking his way past two defenders on his way to a converted score.

The Golden Lions had raced into an 18-6 lead but Province were slowly but surely working their way back into the contest and, 11 minutes, before the break, fullback Tim Swiel sliced through the hosts’ defence to canter over from 22 metres out.

Coleman missed his conversion attempt but he succeeded with a 36th-minute penalty as the Lions went to the break holding a slender 18-14 lead.

The home team had dominated possession in the first-half and they were the first team to score in the second stanza when Helberg collected his own chip ahead from the Lions’ 10-metre line before off-loading to Botha when he had already crossed the tryline allowing Botha to score a converted try.

Province narrowed the gap to just five points after 55 minutes thanks to two penalties from Coleman, but the Lions struck back once again when left wing Anthony Volmink chased through a speculative grubber kick before receiving a lucky bounce to gather the ball and go over for a converted try.

The home team were running rampant and flank Willie Britz dotted down before Botha scampered 70 metres down the left-hand touchline to grab his second try.