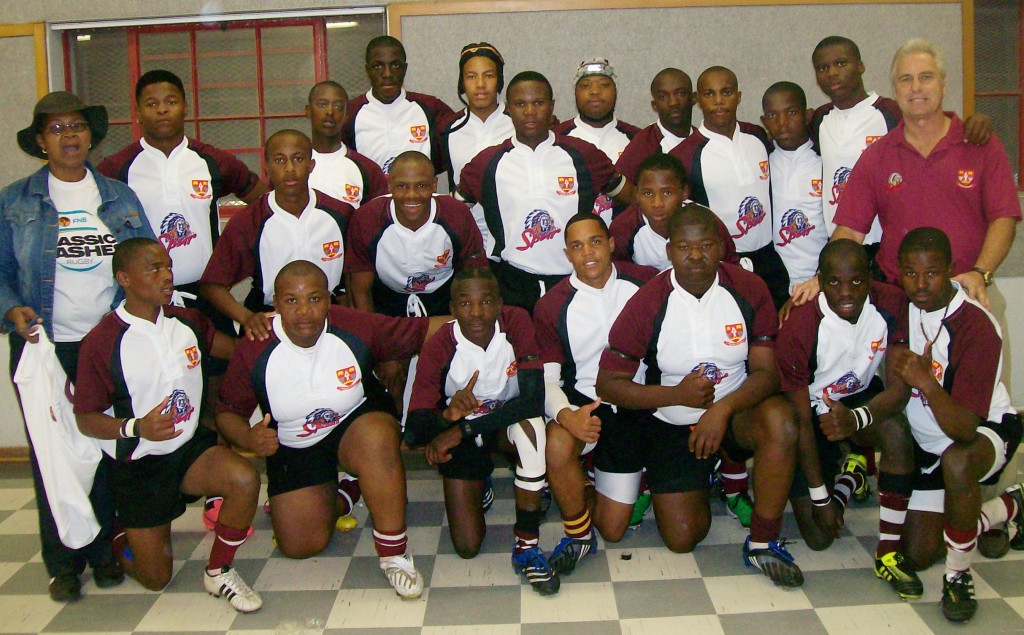 The rugby team from Ithembelihle Comprehensive School in Port Elizabeth received the “Best School Rugby Team of the Year” award at the 2012 SA Sports Awards and proved that hard work pays off.

According to team couch Theo Pieterse, the team was nominated in two categories for this year’s South African National Sports Awards, namely “Best School Team of the Year” and “School Development Team of the Year”.

“The team had an exceptional season with convincing wins over some very established rugby schools in the Eastern Cape and I am particularly proud that they have proven through this award that they are now counted amongst the fully developed rugby teams,” said Pieterse.

It has been a long road since Pieterse first started a rugby development program in Port Elizabeth in 1979.  He initially formed a combined school side in 1994 for all the schools in New Brighton to play against the second rugby teams of schools like Grey and Westering.   Although most games were lost in those days, many great players – like Solly Tyibilika, came from that side.

The first real breakthrough came in 2002 when fly-half Lunguisa January and crash-tackling inside centre Stoba Magaba made history when they became the first two players to be selected for the Eastern Province Craven Week side.

Representatives from Spur Group eagerly followed the progress of the team in the local newspapers and were concerned that the team was running out of funds despite their 2005 victory of 29-27 over giant rugby school Famesby.  They decided to approach coach Theo Pieterse with an offer to back the team.   Pieterse explained that transport was one of their biggest challenges as they played all their matches away from home due to the unacceptable conditions of their playing field.

According to Khakhi Diala of Spur, it was the commitment of the team and their coach that urged Spur to back this particular school side.   “At the time Spur became involved, the team were playing in different colour jerseys that they had won from various local tournaments.  The first thing we did in 2006 was to kit the team out in brand new team gear and to provide meals at the local Spur when on tours,” says Diala.

A little support went a long way and in 2009 the team won the Muir Super Sevens tournament, played in the semi-finals of the @lantic sevens tournament and proceeded to win all their games at the 2012 Sharks talent I.D tournament.

“It is about more than Spur’s support of rugby development.  This team has proven that they are willing to go the extra mile and that with the necessary support, the sky is the limit,” says Diala.

Spur has announced that they will extend their sponsorship of the Itembelihle rugby team to next year to intensify the sponsorship for the full benefit of the team and coaching staff. The boys have got big hearts and Spur is proud to see the effectiveness of their investment from this sponsorship in providing the team with what they require.