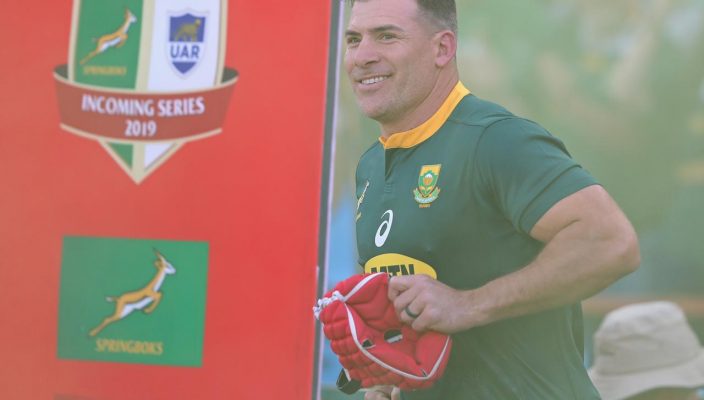 Rassie Erasmus breathed a sigh of relief and confirmed that his 2019 Springbok squad continued on a trajectory of progress following a 24-18 victory over Argentina in a Castle Lager Incoming Test at Loftus Versfeld in Pretoria on Saturday.

Sbu Nkosi scored both the Boks’ tries, while Elton Jantjies kicked five from six as he contributed a conversion and four penalty goals.

Erasmus, the director of rugby at SA Rugby, admitted that the result was a case of winning ugly, but that the game had gone pretty much to expectations.

“Argentina could have beaten New Zealand this season with that maul at the end, and they lost to Australia by six and they could have won that game as well, and I knew they were going to come for us.

“They were very well prepared and played so well and if they had won I would have been sitting here saying they deserved to win. I wouldn’t have moaned if they had – they played really well.

“But it’s nice to learn when you’re winning. We had some things confirmed and learnt other things about combinations.

“We did some good things and some bad things. The bad things were giving away stupid penalties and the intercept pass – not that it was Cobus Reinach’s or one person’s fault – and letting them off the hook at times.
“But we ground it out and I was pleased with the last 15 minutes and the way we finished.”

Erasmus said he would take a group of 37 players to Bloemfontein on Sunday for a final camp during which he would finalise his squad.

“We will choose the final squad of 31 from that group,” said Erasmus.

“There were one or two players that had question marks over them and there were some where we got confirmation and others where we had doubts and things clarified. But we will have a proper sit down tomorrow.”

However Erasmus did confirm, simply, that two-try hero, Nkosi, would be in the 31.

Erasmus also said he was delighted with the performance of Siya Kolisi, who was starting his first test of the season.

“We wanted to get Siya off after 30 minutes and see how he would last but with the injury to Marcell Coetzee we had to change our plans,” said Erasmus.

“At halftime Siya said he was feeling great and that he wanted to go 70, but then he was struggling after 50 minutes. We’ll work really hard on his conditioning and get him right.”

The Springbok squad for the Rugby World Cup will be named at 15h00 on Monday, 26 August.