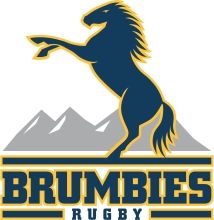 A high-performing South African student will receive a chance to study in Australia under a new scholarship announced today.

Students who are South African citizens with a strong academic and sporting records are eligible for the scholarship.

“An international outlook and sports teaching and research are major parts of life at the University of Canberra,” Professor Parker said.

“South Africans and Australians have a lot in common: we both love rugby and we both value education. I hope by giving a young South African rugby player an opportunity to study in Australia we can strengthen the links between our nations.

“University of Canberra is proud of its professional education, applied research and community links in all areas, but especially in sport. Our partnership with the Brumbies is innovative and unlike any other sponsorship arrangement in professional sport, the mutual benefits are significant and the potential is huge.”

The Brumbies will soon relocate to the University of Canberra campus as part of a unique multimillion dollar ‘sports hub’.

Jake White, who is an adjunct professor with the University, welcomed the Scholarship.

“For many students, this scholarship will be 100 per cent life changing. UC has a proven track record of placing students in good jobs and it’s exciting to think that South Africans are now able to enjoy that system too,” he said.

“I’m constantly amazed at the amount of South Africans who ask me about how they can get their own children into the University of Canberra once they’ve finished school. Emails, phone calls and letters, you name it, people are contacting me saying that they want their children to be given the best education possible.

“It’s fantastic to be making the announcement of the Jake White Scholarship today and I look forward to seeing plenty of South African students take on the challenge of living and studying in Canberra in the future.”

Selection will be based on a written statement which outlines the applicant’s academic and sporting achievements.
The scholarship includes

More information is online at:
www.canberra.edu.au/jakewhite.