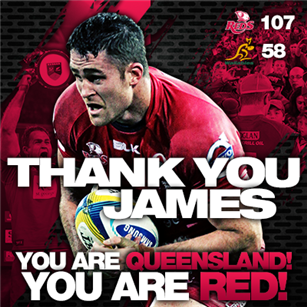 Horwill, a 107-cap St.George Queensland Red who has 58 Wallabies caps and has led the national team on 16 occasions, will make the move to the famous London club following the 2015 Rugby World Cup, which concludes in October next year.

He is currently the most-capped Queensland captain, having led the Reds on 69 occasions.

A modern-day champion of the Reds who led Queensland to the 2011 Super Rugby title, Horwill will make the 2015 Super Rugby season his 10th and his last and is determined to achieve success when he pulls on the Reds jersey for the final time next year.

“The Reds have been my life for many years. I grew up supporting them, I’ve had the honour of representing Queensland on over 100 occasions and also the privilege of captaining my State, including winning the Super Rugby title – a night I will never forget.

“As hard as it will be to leave Ballymore, my teammates, the staff and all my fans and friends in Queensland, I’ve been offered a fantastic opportunity with Harlequins to experience Rugby in another part of the world and this is right for me at this stage of my Rugby career. I’m completely committed to helping the Reds and Australia achieve success in this World Cup year and then I’ll turn my attention to the next chapter of my life in Rugby with Harlequins,” Horwill said.

Queensland Rugby CEO Jim Carmichael paid tribute to Horwill as a player and a man and said he would be leaving the Reds at the end of the 2015 season with the blessing of the club and all its followers.

“James has given everything for the Reds and is one of the great modern-day sporting treasures of Queensland. I was privileged to be in the changing rooms in New Zealand last year when James received his 100th Reds cap from our Chairman Rod McCall. The emotion in the words he delivered to his teammates that night reminded me how lucky Australian Rugby has been to have someone of James’ calibre in its ranks in recent years.

“James and Queensland Rugby have been working together toward this announcement for a number of months and we have discussed this decision in detail as James seeks a smooth transition to the next stage of his Rugby career. I’m pleased James has chosen Harlequins, who are steeped in the history and traditions of our game and with whom the St.George Queensland Reds enjoy an excellent relationship.

“I’m sure our players and fans will ensure that James’ last season with the Reds is one we will all remember in years to come,” Carmichael said.

Conor O’Shea, Director of Rugby at Harlequins, said: “I’m delighted that we’ve attracted someone of James’ standing in the game to play for us following the completion of the Rugby World Club next year. James is known around the world not only for his uncompromising style of play but also for his strength of character. James will be an asset for us on the field and within the changing room.”

David Ellis, CEO of Harlequins, said: “James will be hugely popular with our supporters, who respect his achievements in the game with the Reds and Australia. We are grateful to the Board and management of Queensland Rugby who have worked with us to ensure that James’ transition to European Rugby after next year’s World Cup is as smooth as possible. We look forward to welcoming James to The Stoop later next year.”

Courtesy of the Queensland Reds