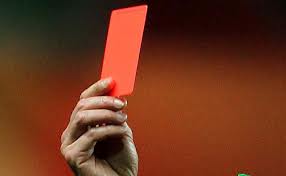 JAMES HORWILL SUSPENDED FOR ONE WEEK

Player: James Horwill
Team: Reds
Position: Lock
Date of Incident: 3 April 2015
Nature of Offence: 10.4 (a) Punching or striking, A player must not strike an opponent with the fist or arm, including the elbow, shoulder, head or knee(s).
Elapsed time in match when offence occurred: 21st minute

The SANZAR Duty Judicial Officer Nicholas Davidson QC has accepted a guilty plea from James Horwill of the Reds for contravening Law 10.4 (a) Punching or striking, after he was sent off in a Super Rugby match at the weekend.

Horwill has been suspended from all forms of the game for one week up to and including 11 April 2015.

The incident occurred in the 21st minute of the match between the Rebels and Reds at AAMI Park in Melbourne on 3 April 2015.

In his finding, Davidson ruled the following:

“I found this was a strike with a swinging arm to the back of neck of Rebels player, Paul Alo-Emile. The explanation that the arm was used to gain momentum at the breakdown was not tenable. There was no attempt to engage.

“The strike was of no effect with no injury to the Rebels player. This was in summary, an ineffectual strike other than its impact on the game as Horwill was red carded in the 21st minute of the match. A submission that this was relevant to setting a lower entry point for sanction was rejected. There is an adverse effect on the game as a whole following a red card.

“Horwill has attracted media attention in the disciplinary context but his actual transgressions are few despite over 100 Super Rugby games and 59 Test matches for Australia.

“He had one off field yellow card (now Citing Commissioner Warning) in 2013 and came before the SANZAR Judiciary in 2015 for two yellow cards in the same match for technical breaches. Nothing was added for aggravating factors and in mitigation, he is entitled to some allowance for his acceptance of the indicated sanction and his recognition that this was clearly unacceptable for which he apologised to the Rebels player and also during the hearing.

“In the circumstances, the two-week entry point is reduced to one week and Horwill is suspended up to and including Saturday 11 April 2015.”