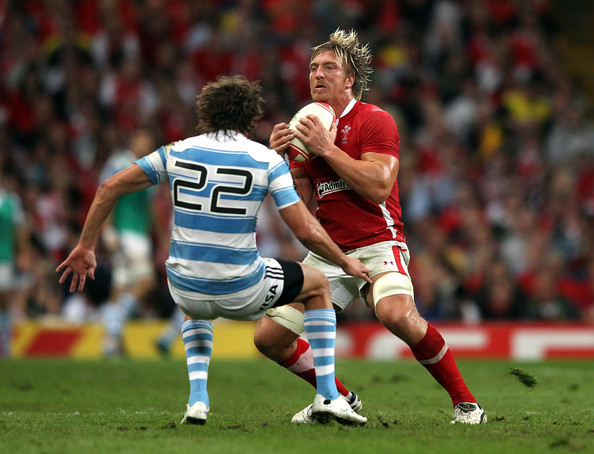 Andy Powell of Wales takes on Juan Imhoff during the International friendly match between Wales and Argentina at the Millennium Stadium in 2011. Photo by Getty Images.

The Wales team to play Argentina in the Dove Men Series opener at the Millennium Stadium on Saturday (2.30pm) shows just four changes to the starting line-up from the 2012 RBS 6 Nations Grand Slam winning side – including one debutant.

In the backs Scarlet Tavis Knoyle replaces Mike Phillips (Bayonne) at scrum-half, with Phillips providing cover from the bench and another Scarlet Scott Williams replaces his regional team-mate Jonathan Davies in the centre.

Davies was unavailable for selection this week after failing to fully recover from the groin injury he sustained whilst on Scarlets duty against Clermont in the Heineken Cup – the Wales medical team say he is working incredibly hard on his rehabilitation and his situation will be continually monitored.

Also ruled out of contention for the Argentina game, alongside Davies and Osprey Ryan Jones (shoulder), was Ospreys centre Ashley Beck who will be allowed more time to recover from an ongoing hip injury sustained prior to entry into this campaign.  Beck will undergo a week of rehabilitation and conditioning which should enable him to be available for selection for next week’s clash with Samoa (Friday 16th November).

Williams partners Jamie Roberts (Blues) in the centre, with Roberts returning to international duty for the first time since the Grand Slam climax against France at the Millennium Stadium last March.

Roberts missed Wales’ recent tour of Australia after undergoing knee surgery and he is one of seven players to come into the starting line-up since that final Test in Sydney.

None of Jarvis, Turnbull, Knoyle, Roberts or Williams faced the Wallabies last time out and they are joined by Dragons No 8 Toby Faletau (who replaces the injured Ryan Jones) and Ospreys second row Ian Evans, in for Blues lock Bradley Davies, from that final game of the summer tour.

“One or two injuries have forced our hands in certain areas in terms of selection, but the fact that we are still able to field a side packed with Grand Slam experience shows that we have been able to develop some depth in recent years,” said Wales interim head coach Rob Howley.

“There are obvious opportunities for the likes of Aaron (at prop), Tavis at scrum-half and Josh in the back row, to pull on the jersey against Argentina and try to make it their own.

“We all know how important a good start against the Pumas will be to our November series, they arrive battle-hardened after a tough Rugby Championship campaign.  They will be looking to silence the Millennium Stadium crowd from the outset and we know we can’t afford to let that happen, with a successful campaign this Autumn vital to our ambitions for the future.”