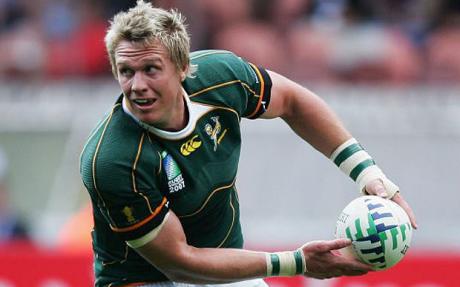 Munster centre Jean de Villiers will leave the province and return to South Africa at the end of the current season.

According to the Belfast Telegraph website, the 28-year-old confirmed his decision on Monday, stating that his desire to play for the Springboks at the Rugby 2011 World Cup had been the primary factor in the decision.

De Villiers missed the entire 2003 World Cup through injury and managed just 40 minutes in the 2007 tournament.

“I feel this is perhaps my last opportunity to represent my country at the World Cup and after consultation with SARU it has become clear that, to qualify for selection, players must be playing in South Africa in the season leading up to the competition,” he said.

“I’m thoroughly enjoying my time here in Munster and I think it would be fair to say that had the World Cup not been a factor, then I would be remaining for at least the next two seasons. I would not rule out returning here after RWC 2011 either.” Munster Chief-Executive Garrett Fitzgerald said: “Jean made us aware of this scenario before he joined us.”

There was no confirmation that he will return to the Stormers, who he captained in 2009 before his departure, or whether he will join another franchise in South Africa.