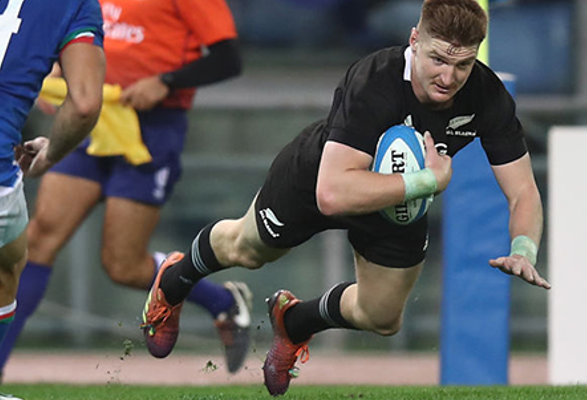 All Blacks and Hurricanes outside back Jordie Barrett has recommitted to New Zealand Rugby and his Hurricanes team, extending his time in New Zealand for at least another three years, through to 2022.

22-year-old Barrett, the younger brother of Beauden and Scott Barrett, has played 10 Tests for the All Blacks since making his debut in 2017 and 48 matches for the Hurricanes. His utility value, as well as his goal-kicking, has been an asset for both teams, with his ability to cover most positions in the backline. He has scored eight tries and kicked one conversion for the All Blacks.

“There is a really good mix of youth as well as experienced leaders in the Hurricanes squad and I feel like this is the best place to develop my game,” Barrett said.

Under his contract, Barrett also has the option to change Super Rugby clubs at some point post 2020. Barrett said he still had a strong desire to play Super Rugby alongside his brothers at some point in his career but added that when that would happen remained unclear.

All Blacks Head Coach Steve Hansen said: “Congratulations to Jordie on his decision to re-sign with New Zealand Rugby. He’s an outstanding, talented young player who has soaked up everything he can in the All Blacks environment and grabbed every opportunity with both hands. He has a big future in the game and we look forward to seeing his career grow over the next few years.”

Hurricanes head coach John Plumtree was delighted Barrett had made the decision to stay at the club.

“He is obviously a really key individual in our squad and we are really looking forward to growing his game even further in our environment,” he said.

“We want to really develop Jordie as a leader and he will be a key driver in our team for the next three seasons. He is going to play a big role on and off the field for us.”

Hurricanes chief executive Avan Lee was also thrilled by Barrett’s decision which would be welcomed by all of the club’s fans.

“Jordie has become a big part of the Hurricanes over the last three seasons and we all wanted that to continue and we are delighted it will,” he said.
“I know all the coaching staff and his team-mates will also welcome his decision and we really look forward to seeing him back at the Hurricanes at the end of the year as we prepare for an exciting 2020 season.”

Mini bio – Jordie Barrett
Born into a rugby-mad family, 22-year-old Jordie Barrett had been tagged for big things ever since his days at New Plymouth’s Francis Douglas Memorial College. A talented fast bowler in cricket, he chose rugby and headed down south to Lincoln University to study commerce. In 2016, after just one season of Mitre 10 Cup rugby, he toured as an apprentice with the All Blacks to the Northern Hemisphere. In 2017 he made his Hurricanes debut, scoring 135 points, including seven tries. He made his All Blacks Test debut against Samoa later that year and also scored a try in the drawn Series decider against the British & Irish Lions. His outstanding season was cut short by a shoulder injury and he spent eight months on the sideline but returned in 2018 in sparkling form.