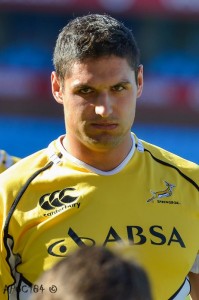 Vodacom Bulls lock Juandrè Kruger did not extend his contract with the Blue Bulls Company (Pty) Ltd beyond the the 2013 Vodacom Super Rugby season and will leave the Vodacom Bulls to join up with French club Racing Metro 92.

Kruger made his debut for the Springboks this year and played in eight tests following an impressive Super Rugby debut for the Vodacom Bulls. His contract with the BBC runs out in June 2013 and although the Vodacom Bulls could secure his services till the end of the competition, the 27 year old opted for the move to Paris after that.

“It is always good to know and to hear that your players are wanted all over the world, but unfortunately it is not always possible to hold on to them once those offers start coming in,” Ludeke said.

“With the exchange rate as it is at the moment, it is very difficult to remain on level terms with those clubs when it comes to contract talks. We were very keen to extend his contract, but financially it was just not possible. We are very happy for Juandrè, as it is a great offer he received, but that left us in an unfortunate position that we could not match it.”

Ludeke has no problem with Kruger’s continued commitment to the Vodacom Bulls in 2013.

“Not at all. Juandrè is a real pro and I know we can still expect a 110% effort from him. We sat down as a group recently to discuss our goals and objectives for 2013 and I am very confident that we will get an exceptional contribution from Juandrè right till the last game of our season.”