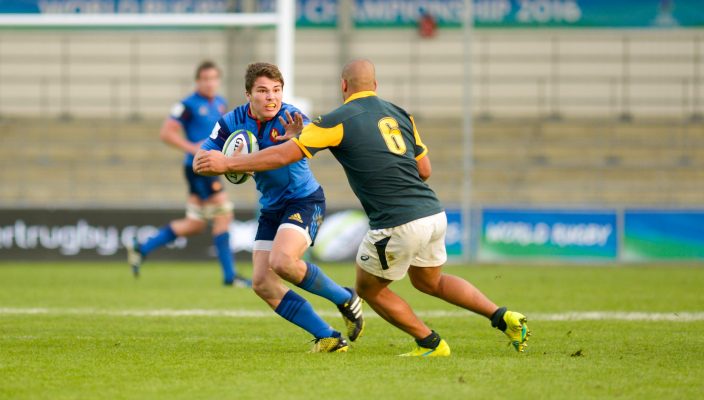 Junior Springbok coach Dawie Theron on Wednesday praised his team’s fighting spirit to book their place in the World Rugby Under-20 Championship semi-final against hosts, England, with a 40-31 victory against a determined French outfit at the Academy Stadium in Manchester.

The South Africans fought their way back from a 24-18 half-time deficit to finish the match with a total of five tries to four by France, which earned them a bonus-point win and the last semi-final place up for grabs.

The team entered the match needing a victory with 14 points to secure a semi-final place, while they had to ensure that Australia did not register a big victory against England, as their match played out at the same time.

“I am proud of the fighting spirit the players showed,” said Theron. “There were times when we allowed France to apply immense pressure on us, but the team showed fantastic character to bounce back after half time and to earn the bonus point.

“That said we have a lot of work to do before we meet England. We need a vast improvement in the set pieces and we have to tighten up our defence. But the important thing is that we have qualified for the semi-finals.”

The first half proved to be a tense contest as France used their powerful forwards to force their way over the advantage line, and combined this with smart tactical kicking. This earned them three first-half tries to two by the Junior Boks for a 24-18 lead.

France struck first in the fourth minute with a converted try to take a 7-0 lead. But Junior Springbok fullback Curwin Bosch kicked two penalties to reduce the gap to 7-6.

The South African’s appeared to find their rhythm on attack and added a try a few minutes later compliments of scrumhalf Embrose Papier from a pick-and-go, which Bosch converted for 13-7 lead.

However, the Junior Boks’ struggle to make effective one-on-one tackles and to counter the French forwards allowed France to score two more tries for a 24-13 lead.

The Junior Boks fought back strongly in the dying minutes of the half, and the rewards followed with flanker Zain Davids scoring a try after applying pressure on attack close to the tryline. This reduced the deficit on the scoreboard to 24-18.

The Junior Boks were awarded two penalties before half time, and while they tried hard to attack, the solid French defence shut them out.

The South Africans came out firing in the second half with wing Edwill van der Merwe scoring the team’s third try four minutes in from a counter-attack, which pushed the team into a 25-24 lead.

French flyhalf Romauld Seguy received a yellow card soon after for tramping on Jeremy Ward in a ruck.

The Junior Boks tried hard to apply pressure on France as the game progressed, and they reaped the benefits with two tries in four minutes by Manie Libbok and man-of-the-match, Bosch, to lead 40-24 with 12 minutes left on the clock. This also earned them the bonus point for four tries.

France hit back hard in the dying minutes and earned a try in the last minute for their efforts, but they were forced to settle for a 40-31 defeat.