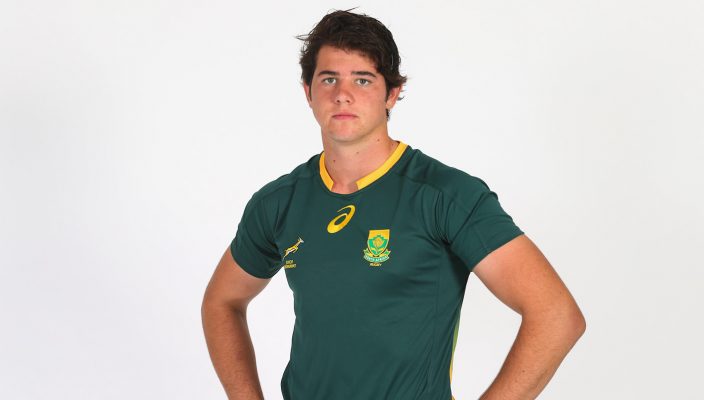 Junior Boks’ Van Heerden is following in his father’s footsteps

At the young age of 18, Junior Springbok lock Emile van Heerden – who faces the prospect of making his World Rugby U20 Championship debut in the next few weeks – is showing signs that he could follow in the footsteps of his father, former Springbok lock Fritz van Heerden.

Van Heerden made his SA U20 debut in April, and standing tall at 2m and weighing in at 100kg, the player – who admits that he just recently shot above his father’s height – is enjoying his rugby and is excited to take to the field in Argentina.

The Junior Springboks kick off their World Rugby U20 Championship campaign on Tuesday against Scotland at the Racecourse Stadium in Rosario.

“It is a big honour and a privilege to in the Junior Springbok team and to have this opportunity to represent my country,” said Van Heerden.

“It was my dream to follow in my father’s footsteps since I was a young boy, and I feel like playing for the SAU20’s is a step in that direction.”

Did his father – whose Springbok career spanned over five years between 1994 and 1999 during which he played 14 Tests and participated in the 1999 Rugby World Cup – have any special words of advice going into the international showpiece?

“He told me to enjoy the experience, to keep calm and to do what I have to do on the field,” said Van Heerden, a former Paarl Boys’ High pupil who also has fond memories of playing rugby with his father and brother after school, and he was appreciative of the insights his father is able to give following his matches.

“My father never pushed us in a specific sporting direction when we were young, instead he allowed us to do whatever we wanted to, so I played tennis, cricket, rugby and I cycled as a youngster. But I always loved rugby, and I saw photos of him playing, so I decided to pursue the sport.

“I remember staying behind at the rugby field with my father and brother after school and practicing kick-offs, catching high balls and sometimes playing touch rugby.

“The nice thing about the fact that my dad also played lock, is that he can give objective insights into my performance after each match. He also gives me tips about the lineouts from back when he played and also in the modern game.”

With the World Rugby U20 Championship around the corner Van Heerden shared his captain, Phendulani Buthelezi’s sentiments that he couldn’t wait to run onto the field and said: “I am very excited to play. There are some butterflies, but we have been very training hard, and we are keen to get out onto the field.”

“I got goosebumps the first time I pulled the Junior Springbok jersey over my head and looked down and saw the emblem, and I still get that feeling in each match, so I am really looking forward to what lies ahead in Argentina.”