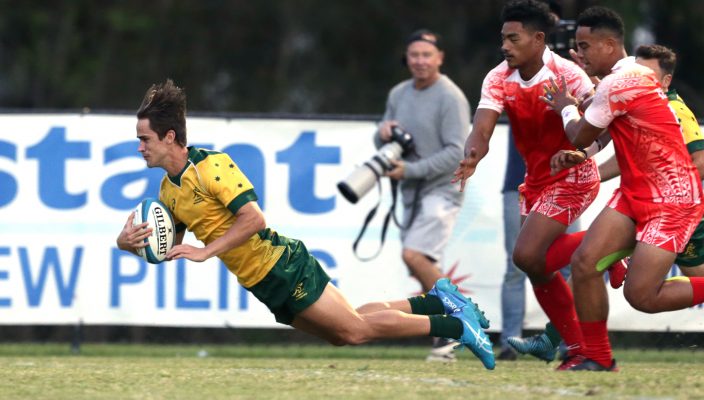 The Junior Wallabies have outclassed a spirited Tongan U20s side 91-7 in round two of the Oceania Rugby U20s Championship.

The Junior Wallabies were never troubled by their Pacific neighbours as they put on 15 tries to one setting up a showdown with New Zealand on Saturday 5 May.

With both New Zealand and Australia undefeated in the Championship, it will be a winner takes all Final between the two Trans-Tasman rivals.

Junior Wallabies Head Coach Jason Gilmore said: “The Tongan guys had a crack tonight but in terms of the standard of play those type of games can get a bit tricky and the little skills that win you good games you just have to be careful that you are still paying attention to them.

“The score line is irrelevant for us tonight, it was more about the quality of our defence and attack sets we were looking for, it was about what the boys were doing on the field.

“We went with two bigger centres tonight with Tony Hunt and Isiah Latu, and they got us on the front foot.

“We have some really nice ball players in Will Harrison, Lawson Creighton and Isaack Lucas who came on in the back end who played well in the first game.”

Australia started the match with a try in the opening minutes and continued their rampant form throughout the match.

Australia will face New Zealand on Saturday 5 May at 7pm AEST at Bond University Rugby Club with the match to be streamed LIVE on RUGBY.com.au.