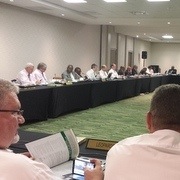 The General Council of the South African Rugby Union (SARU) on Wednesday unanimously approved the extension of the contract of Jurie Roux as the chief executive officer of the organisation.
The Council accepted the recommendation of the SARU Executive Council to a five-year extension of Roux’s contract, which was scheduled to expire in September 2015.

“Jurie Roux has been an outstanding CEO of SARU and we are very happy to have extended his contract with the organisation,” said Mr Oregan Hoskins, the president of SARU.

“SARU has made major progress since he was appointed in 2010 and we look forward to continuing to grow the game with Jurie as the operational head for the foreseeable future.”

Mr Hoskins said that there had been a number of notable achievements since Roux had taken over as CEO.

“Jurie managed the process of re-engineering our two separate ‘amateur’ and ‘professional’ arms into one,” said Mr Hoskins.

“We have established SARU academies in four provinces to develop black talent and created an inspirational new club competition in the Cell C Community Cup; we have contracted women rugby players for the first time and developed a Coca-Cola School of Excellence programme to uplift black, traditional, rugby-playing schools.

“Our new High Performance department has done outstanding work in coaching support to our national teams and provinces and we have created our own rugby-playing intellectual property in analysis and athlete management systems. Jurie managed the process of appointing Heyneke Meyer as national coach and our national team results have been on an upward curve at Springbok, Sevens and Under-20 level in recent times.

“A year ago we opened a world-class rugby museum, The Springbok Experience, to properly honour the heritage of the game in all our communities and there have been numerous upgrades to our operating procedures that go unseen by the public.”

Mr Hoskins said that the Exco had applied its mind to allegations appearing in newspapers relating to activities at Stellenbosch University during the time of Roux’s employment there.

“We were made aware of certain allegations and we have interrogated them,” he said. “We are satisfied with the explanations that Jurie Roux has given to us.

“It is gratifying that, despite all the publicity, the 14 member unions of SARU voted unanimously to approve Jurie’s reappointment.”