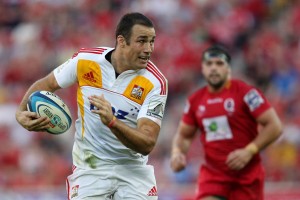 Richard Kahai set to resume his career in Japan. Photo by Getty Images.

Chiefs midfielder and recent All Black Richard Kahui has announced he will leave New Zealand rugby to play rugby in Japan.

Kahui will head to Japan to play for the Toshiba club for two seasons following the 2013 Investec Super Rugby competition with his current champion Chiefs team.

“I love being a Chief, but it is no secret that I have had my fair share injuries which have forced me to make some very hard decisions about my future and make the most of the opportunities while I can,” said Richard.

Chiefs’ coach Dave Rennie said “Richard has been an outstanding member of the Chiefs family, having played over 50 games for us.

“I have been really impressed with him as a man, as a player and as a leader within our group.

“He has an opportunity to set himself up for his future and we are fully supportive of what he is doing and hope to get him back for 2015.”

Kahui has played 17 Tests for the All Blacks since making his debut in 2008 and has scored ten tries.

The Chiefs head to Mangatainoka to play the Hurricanes on Saturday in their last pre-season fixture ahead of their first round of Investec Super Rugby against the Highlanders at Forsyth Barr Stadium, Dunedin on Friday 22 February.