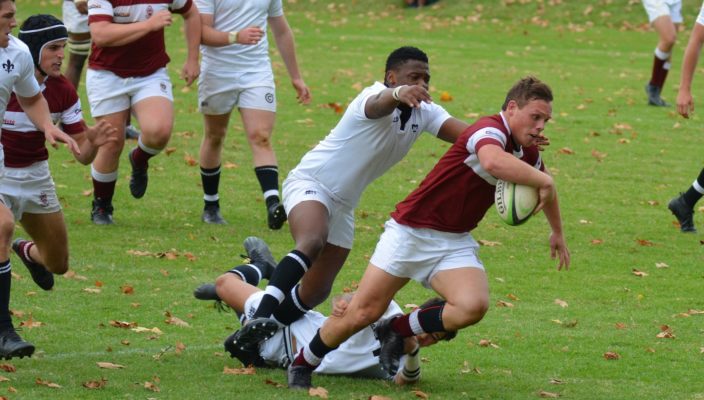 Hilton hosted Kearsney for the first of a double header for 2018 season in overcast and windy conditions.  Kearsney started well and scored their first try within the first three minutes of the match.  Scrum half Taine Muirhead dived over from the base of a ruck, close to the right upright, which he converted for a 7-nil lead.

Soon afterwards he received the ball from an up-field Hilton kick and delivered a monstrous 45m-plus drop kick for a 10-0 lead.

Hilton fought back and, despite solid Kearsney defence, eventually capitalised from a scrum turnover with centre Siyabonga Xulu pushing over under the poles, which Gareth Schreuder converted.

Kearsney slotted a Muirhead penalty, to stretch the lead to 13-7.  Hilton dominated the second part of the half.  Hilton fly half Ruan Wilmans found a clever worked gap to score untouched close to the left upright.  With the conversion, Hilton lead 14-13 at half time.

The second half produced plenty of entertainment with both teams prepared to give the ball air. Hilton started off well when Kearsney failed to exit their half.  Hilton winger Robert Mattison eventually scored an unconverted try in the left corner to increase the lead to 19-13.

Kearsney hit back almost immediately with ever present flanker Taine Polzi running through the close defence and stepping the last defender, for Muirhead to convert and regaining the lead 20-19.

The lead changed hands again with Hilton scoring a converted try, courtesy of their hard-running forwards sucking in the defence and rounding the last outside defenders.  Hilton continued with more of the same power play and eventually hard-working lock Niaan Taljaard was rewarded with a converted try for a 33-20 lead.

Kearsney then enjoyed a good passage of play.  Loose forward Sibu Sangweni charged down the Hilton scrum half’s exit attempt and scored under the posts for Muirhead to convert; shrinking the deficit to 27-33.

Kearsney battled to exit their own half and, coupled with bad lineout work, gave Hilton the ascendency.  Before long the hosts scored in the left-hand corner for a 38-27 lead.

Credit to the visitors as they did not give up and pushed hard to the end. With Robert Koenig prominent, Kearsney’s big centre Derrick Marshall got his try.  Muirhead converted to take the score to 34-38.  With two minutes left, both teams fought hard but the score remained.

The crowd was treated to a great game of school boy rugby.  The return match at Botha’s Hill in a few weeks’ time promises to be an exciting fixture.