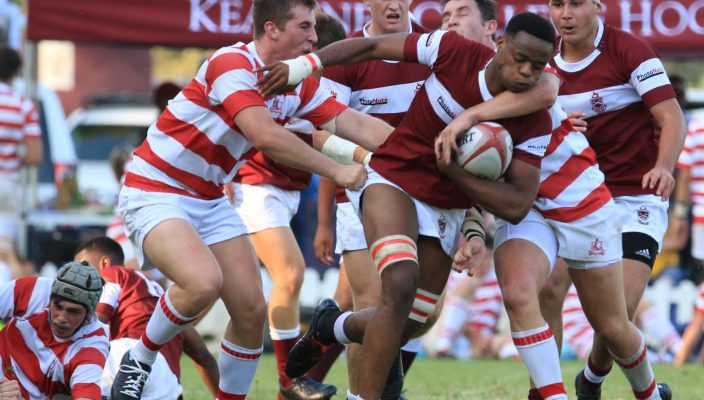 Kearsney hosted Michaelhouse for the season’s first traditional fixture.   The match, and the first half in particular, was marred by typical first match rustiness and errors.

Kearsney had the upper hand from the start but were unable to take advantage of opportunities on offer. The crowd had to wait for 17 minutes before Robbie Koenig scored the first try of the match after some good creative work by fly half Jacques Odendaal.

Odendaal again combined with full back Koenig later, after well-worked play between forwards and backs following a lineout. Koenig provided an offload to right winger Scott Couzens to score in the right-hand corner for a 10-0 lead after 23 minutes.

Michaelhouse scored their first try from a 5m scrum with a strong pick and go by their number eight, for a first half lead of 10-5 to Kearsney

The hosts started the second half with more intent and Koenig soon struck again from a rehearsed backline move from a right-hand scrum close the halfway line. Odendaal converted for a 17-5 lead.

Kearsney scored their fourth try after a good lineout drive and pick and go by the forwards and switching play to the blind side. Flanker Sibu Sangweni collected a pass at good pace and good angle, to dive over. Odendaal converted.

Immediately from the kick-off Michaelhouse scored after sustained pressure in the Kearsney quarter of the field. The defence held, but Michaelhouse found an overlap on the right-hand side for an unconverted try, for Kearsney to lead 24-10.

Kearsney answered and extended their lead to 27-10 with an Odendaal penalty after some good competitive work at the breakdown by prop Oliver Carmody. Final points came from another Michaelhouse number 8 pick and go from the base of a centre scrum 10m out. Kearsney’s back row made a technical defensive error and the visitors capitalized with a seven pointer to narrow the gap to 17-27.

Kearsney enjoyed possessional and territorial advantage throughout, but small errors prevented them from converting opportunities into points. The hosts’ standout players were Koenig, Sangweni and Odendaal.