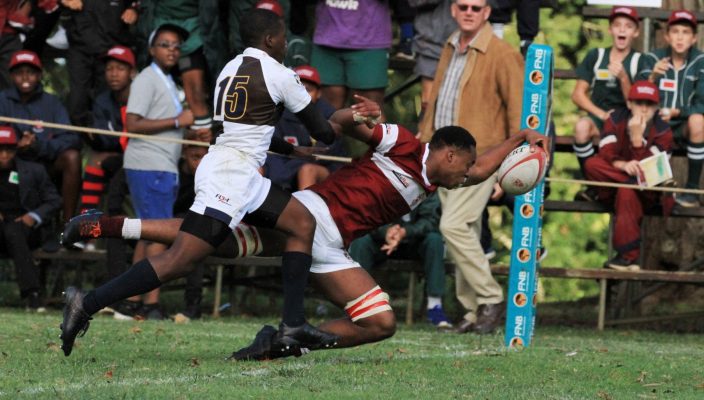 Kearsney hosted Northwood in an FNB classic clash on a pleasant afternoon following two days of rainy conditions. Northwood dominated the opening quarter and eventually their burly number eight dived over in the left-hand corner resulting from a quick tap penalty to which the hosts were slow to react.

The visitors’ persistence and domination continued and they were rewarded again with a converted try from a well-executed counter attack resulting from a poor return kick and defence. Northwood deserved the 12-0 lead after 20 minutes’ play.

Kearsney regrouped well and soon turned over a lineout, close to their own 22m. They moved the ball down the back line and, after two breakdowns, fly half Taine Muirhead broke the defensive line, finding full back Jacques Odendaal at full flight. He timed his feed to winger Mark Pretorius who scored in the left corner for an unconverted try.

The hosts’ found their rhythm and within three minutes scored another brilliant try, where forwards and backs combined well.  Muirhead enjoyed another line break to feed eighthman Andrew Harding who found flanker Taine Polzi on his inside, who outsprinted the defence to dive over near the upright.  Muirhead converted and brought the scores level at 12-all until halftime.

Kearsney dominated territorially the first 10 minutes of the second half and capitalised on two Muirhead penalties to take the lead at 18-12.

The next try must be the most memorable of the match by flanker and man of the match Sibu Sangweni. He provided a seldom seen solo effort of this quality from close to his own 22m, beating a number of defenders to score a spectacular long range try in the left-hand corner.

Northwood responded soon afterwards with a penalty to close the score to 15-23.

Kearsney had the better of the remainder of the match but failed to capitalise on opportunities. Credit to Northwood for playing to the end, after Kearsney failed to close the match from a penalty for touch which saw the visitors scoring a converted try, for a final score of 23-22 to the hosts.