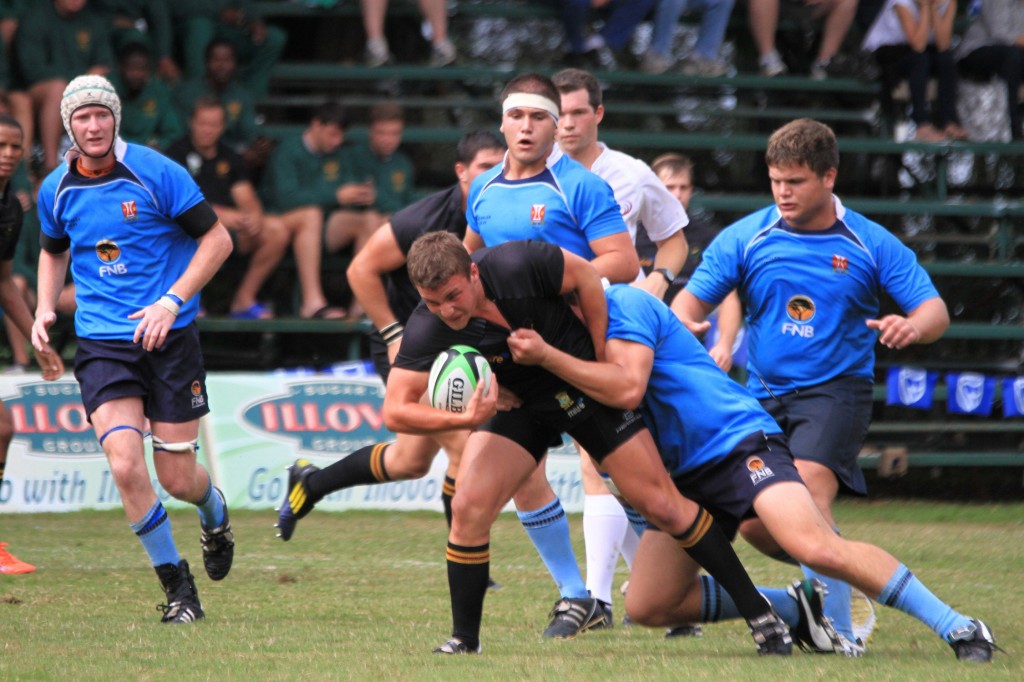 After their respective wins today, Paarl Gimnasium and Outeniqua both remain unbeaten at the Kearsney Easter Rugby Festival.

Playing in sunny but breezy conditions, Paarl Gimnasium scrumhalf Brendan Nel opened the score to give the Western Cape team a seven point lead after 10 minutes.  Grant Hermanus’ spectacular run from halfway, stepping through three players to dot down under the poles, gave Paarl Gim a lead of 12-0.

Glenwood tried valiantly to stay in the game, with a great try by wing Sphamandla Ngcobo, which opened the local team’s score.

DJ van Niekerk crashed over the line for Paarl Gim, which was converted by Wyatt Murphy, to give them a 28-5 lead.

Curtis Jonas then scored for Glenwood, taking the score to 28-12 still in Paarl Gim’s favour.

Ryan Oosthuizen added a try for the Paarl Gim tally, stretching the lead to 33-12; and Gareth Cilliers wrapped up the game for a convincing 40-12 victory to the boys from Paarl.

Paul Roos opened their scoring through a try by Herschell Jantjies which was converted by Matt Gallow, giving the Stellenbosch team a 7-0 lead.  Gallow then kicked a penalty to take the lead to 10-0.

Selborne College put points on the board just before the break, with a try by Tango Balekile, which was converted by Stuart Dixon, leaving the half time score at 10-7 in Paul Roos’ favour.

After the break, Selborne scored and converted; but Paul Roos 8th man Jacques Oosthuizen ensured they stayed in the game with a try, giving the boys from Stellenbosch a 17-14 lead.

Not to be outdone, the team from East London converted a penalty off the boot of Gallow, levelling the scores at 17-17.

Outeniqua logged the biggest upset of the festival yet, recording a narrow win over powerhouse Grey College from Bloemfontein.  The two teams went into this clash having won both their previous games.

Grey College opened the scoring through a converted try from EW Viljoen to lead 7-0 after eight minutes.

Outeniqua bounced back immediately with a try through winger Leighton Eksteen; before captain Geor Malan ran the length of the field to score under the posts and take a 12-6 lead.

Grey then got three points through Viljoen and added to that with a try from Andries Kriek to lead 17-12.  Viljoen extended the lead with a penalty, taking the half time score to 20-12.

Kwaggas captain Malan scored another try to lead to 20-17 with 20 minutes left to play.

A great try by Outeniqua flyhalf Dewald Human saw Outeniqua settle the game 22-20; thus recording the biggest upset of the festival to date.

In another high scoring game which gave Westville their first win of the festival, Framesby opened the scoring with a penalty from fly half Ernst Stapelberg.

Westville bounced back with a brilliant break from second centre Brad Ellse, to set up Jason Wilks under the poles for a try.  Westville led 7-3 at the half time break.

They then extended their lead through Wiehan Prinsloo with a conversion from Louis Snyman.  Ellse took a quick penalty to crash over the line, giving Westville a 21-3 lead.

Play maker Reece McHardy scored from a great set piece move and Westville led 28-3before Zane Weir extended the Westville score to 35-3 with 10 minutes to go.

A great maul saw Raymond Jardine crash over to give the local team a lead of 40-3; and Westville right winger Lyle Lubber wrapped up the game with a brilliant try and Westville won 47-3.

Joint Man of the match:

Spectators at the final day of the Kearsney Easter Rugby Festival were treated to a warm, sunny day in which to watch the high scoring clash between EG Jansen and Nico Malan, which was blown by World Cup referee Craig Joubert.

EG Jansen proved to be too strong for a Nico Malan team which never gave up and again impressed with their spirit.  Their clinical display saw them run in 11 tries with a number of players putting in superb performances.

A well-deserved man of the match award went to EG Jansen number 10 Ruan Potgieter for his two tries and five conversions.

For Nico Malan, captain Selvyn Davids again shone with some individual brilliance in a difficult game for his team, scoring two tries and two conversions.  Davids has enjoyed a fantastic festival and has a special talent – definitely a player to watch in the future.