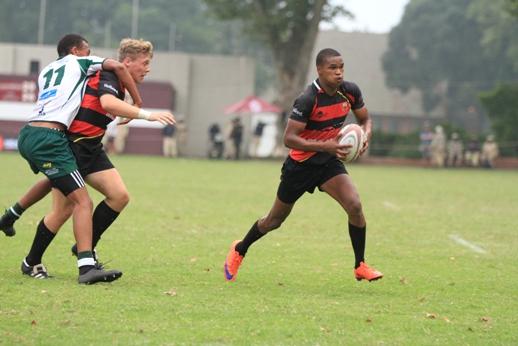 KEARSNEY EASTER RUGBY FESTIVAL 2018 REPORT AND SCORES FROM DAY ONE

The final match of the day at Kearsney, between Noord-Kaap and Welkom Gimnasium, was full of movement and greater continuity than the two previous matches, adding to the enjoyment of the spectators.

Noord-Kaap were attacking when an error enabled Welkom to move the ball from the in-goal area.  Two passes out to the right found wing Apla de Kock, who made 60m down the right touchline before passing inside.  Left wing Marno April needed a 30m sprint to score under the poles for the try of the day.  The conversion by FC du Plessis was successful for the Eastern Free State visitors to lead 7-0.

They continued to out-muscle and out-pace Noord-Kaap and another midfield mistake by Noord-Kaap was picked up by lock Husayn Banzi who drove his way 50m to the try-line, handing off three attempted tackles.  Another successful two points by Du Plessis put them 14-0 in front.

Noord-Kaap managed to get on the scoreboard with a long-range penalty by Seanriq Daniels.  This was followed immediately by a try after a 50m run by right wing De Kock for his second and a 21-3 lead going into the break.

There was no let up by Welkom in the second half and they continued to dominate.  A missed attempted clearance by a Noord-Kaap kick was spread left across the field finding April who evaded two tackles and side-stepped his way past the final defence to score.  Again, the conversion successful, to put them 28-3 ahead.

Noord-Kaap had their most successful period of the game going into the last quarter when they spent 10 minutes in the Welkom 22m area.  However, good defence by Welkom kept them at bay.

Thereafter both sides were unable to add to the 28-3 score; and so ended a successful first day at the festival

The penultimate match of the first day saw the breeze strengthening, clouds coming in and a welcome drop in the temperature.  Durban High School (DHS) and Selborne College from East London met in a dual of thrusts and parries.

It took sometime before the first points were scored, with DHS wing Malusi Ntuli converting a penalty.  Selborne flyhalf Thomas Bursey replied a few minutes later and the score remained 3-all until DHS scored a try just into the second quarter.  A cross-kick to the left saw two DHS players almost gather the ball, but the favourable bounce ensured centre Darren Booysen first to the ball for a try.

DHS, with an 8-3 lead, then increased it to 11-3 when Ntuli added his second penalty just before the break.

Ten minutes into the second half DHS front row forward Marcel Nel went over following a ruck. Again, the conversion went wide but the lead had increased to 13 points.

Selborne at last managed passes without mistakes, to send centre Likhaya Tengimfene over in the corner.  This brought Selborne to 8-16 but they were playing with greater intent.

They camped in the DHS half for 10 minutes but were unable to make it count.  Just three minutes from the end, Selborne prop forward Jacques Goosen barged over,   r but an easy conversion was missed.

DHS held on for a 16-13 lead in an exciting finish with Selborne striving for a win.

An almost score-less first half, where neither school gained dominance, had most of the rugby being played between the two 22m areas.

When Framesby looked as if they were gaining some dominance in possession, it was Dale with a kick ahead on the halftime whistle that led to the first points.  Fullback Emile Matsinya chased, getting his hand on the ball before the Framesby defence for the try and a 50-0 lead at halftime.

The game livened up in the second half when Framesby scored twice in the third quarter.  The first was by forward Rikus Smith after a ruck, and the second by wing Luan Ras after inter-passing between Ras and Sebastian Brand as they ran 50m down the left touch line, beating the defence with good passing.

Framesby scored their third try from a maul following a lineout after a long kick downfield which found touch just in front of the corner flag.  Flank De Wet Erasmus came up with the ball after the rolling maul.  The conversion was again wide but their lead had increased to 15-5 which remained as such to the end.

The third match was expected to be closely contested between Glenwood and HTS Drostdy, two of the highest ranked sides at the festival.  It did not disappoint with play moving from one end to the other.

Although the half-time score was 19-7 it could easily have been closer as Drostdy had their chances, but good Glenwood defence prevented them scoring more than a single try in the first half.

Glenwood opened the scoring when Drostdy, with the ball in hand, made a mistake and it was capitalised on by centre Conan le Fleur, the Glenwood SA schools’ player, who ran 20m to score.  Their second SA schools’ player, Jayden Hendrinkse, added the extra points for a 7-0 lead.

Fullback Joe Jonas completed a good handling movement when he dived over in the corner for a 12-0 lead.  Drostdy had also looked dangerous with the ball in hand but mistakes cost them dearly.

A little stab through resulted in a Drostdy line-out 5m out.  The ensuing maul was controlled well by Drostdy and their eighth man CJ van Rensburg fell on the ball for a five-pointer.  Cohen Jasper converted to leave the score 7-12.

Just on half-time Hendrikse forced his way over and, with his conversion successful, took Glenwood into halftime with a 19-7 lead.

Drostdy were the first to score in the second half after a successful box kick was gathered by wing Adrian Maans who showed good pace down the touchline to dot down in the corner, thereby narrowing the gap to 12-19.

Glenwood were not finished winning good ball from a ruck and it was spread to the left.  Good inter-passing down the left flank ended in Hendrickse’s hands.  He cut inside to score under the poles, giving himself an easy conversion and extend the lead to 26-12.

Going into the last quarter, Glenwood were awarded another penalty at a ruck which Hendrikse converted.  Drostdy again had chances but poor passing and handling prevented them getting over the line until six minutes from the end; where they did get their movement with a five-pointer, converted by Jasper, to narrow the lead to 10 points.

A good long pass to Jasper on the right end in a consolation converted try in the final seconds of the game, leaving the score 29-26 in a fine game of top schoolboy rugby.

With temperatures rising, spectators were already heading for the shade by the second game.  The match between Queen’s College and Pretoria Boys High never rose to the heights of the first match.  The sides were evenly matched and mistakes on attack by both sides resulted in try-scoring opportunities going a-begging.

Minutes after the kick-off Pretoria were awarded a penalty which Justin Cross converted for an early 3-0 lead.

Midway through the first half, Pretoria sustained pressure by the forwards, and the ball was moved through a number of hands to hooker Richard da Costa.  This time there was no mishandling, enabling Boys High to take an 8-0 lead which they held until the half-time break.

A break-away by Queen’s centre Siya Tyulu handed the ball to flyhalf Sinethemab Tshunu.  There was good support by centre Enrique Oranje who received the pass, before he dived over in the corner.

Queen’s maintained their resurgence and another good handling movement resulted in Tyulu diving over in the right-hand corner to give them a 10-8 lead.

With five minutes remaining, Boys High were awarded a penalty over 40m out and Cross was able to put his team into a one-point lead.

Two minutes later a mistake in the defence by Queen’s led to another penalty just in front of the posts.  Cross had an easy kick to increase the lead to 14-10.

Kearsney College, who traditionally play the opening game of their festival, and visitors HTS Middelburg ran on to the Stott field in ideal conditions for this opening match.

After a jittery start, Kearsney gradually gained the ascendancy with both possession and field position.  It took 15 minutes before the first score, after the hosts had crossed the line earlier, but the referee ruled the ball had been held up.

The first try was scored by fullback Jacques Odendaal when he received a short pass from flank Sibusiso Sangweni who had made the break.  Taine Muirhead added the two points for a 7-0 lead.

Just five minutes later, after forward pressure in the Middelburg 22m area, a ruck on the try-line was won by Kearsney and the ball slipped over to Odendaal who dived over for his second try and a 12-0 lead.

After two missed penalty conversions, Muirhead added three points on the stroke of half-time for a 15-point lead.

Early in the second half, again after forward possession in the 22m area, hooker Reid Stuart barged over for Kearsney’s third try.

The Middelburg forwards began asserting some pressure, resulting in their first try, when wing Quintino October went over.  A conversion by Morne Sonnekus narrowed the deficit to 7-20.

A quick tap from a penalty caught Kearsney off guard and the ball was passed through a number of hands to October who jinxed his way through passing to Lenard Olivier who outpaced the defence.

Eighth man Juandre Odendaal crashed over for their third try, sprinting 30m to score near the touchline.  A good conversion by Sonnekus narrowed the gap to just four points.

Kearsney appeared to tire as Middelburg got a second wind and, in the final minutes, a handling mistake by Kearsney was pounced on by Middelburg centre Mariano de Villiers who ran 40m to score.  Although the conversion went wide, they had won the game 26-25 in a game of two halves.