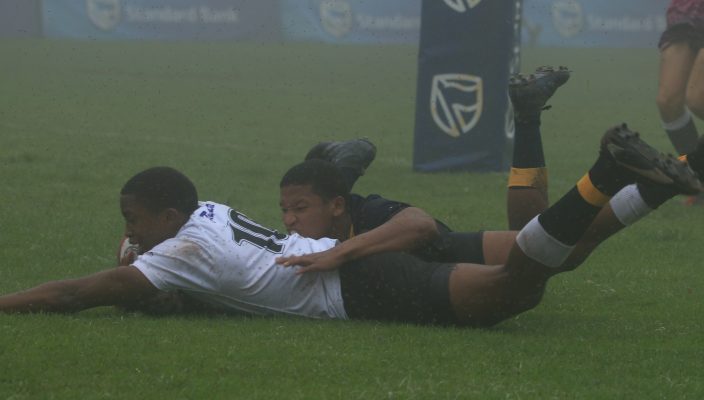 With the mist thickening, much of the game between Durban High School (DHS) and Queen’s College was played with spectators struggling to see across the field.  Despite the wet conditions, handling on both sides was good.

It was Queen’s who dominated the first quarter and they were rewarded with a try when scrumhalf Aviwe Kanuka broke from a scrum, passing to his flyhalf Sinethemba Tshunungwa, who broke through several tackles to score close to the uprights.  Kanuka added the points for a 7-0 lead.

DHS, who had missed one penalty at the posts when it hit the upright, then converted from closer to the touchline and Shakur la Douce opened their points to trail 3-7.

Both sides had further opportunities, but it was not until a few minutes from half-time that a Queen’s player lost the ball in a ruck close to the goal line, and DHS flank Asande Mnguni toed the ball forward and fell on it over the goal-line for a 5-pointer.  It was well covered by La Douce to take DHS into a 10-7 lead at the break.

The mist thickened even further and it became difficult even to see halfway across the field.  Going into the last quarter with 14 players after a yellow card, DHS won ball, swung it to the right with scrumhalf Jaydian Cedares running wide and an inside pass to fullback McNeil Jenner who went over for a try.  This was again converted by La Douce for a 17-7 lead.

With just three minutes remaining in the game, DHS, with some enterprising passing, moved down the left for hooker Stoney Stenekamp to score a try in the corner.  La Douce again slotted the kick for DHS to win 24-7.

In contrast to the heat of the first day of the festival, Day 2 started with mist rolling in over the Stott field.  The first half, between Pretoria Boys and Hoerskool Framesby who had both won their fixtures on Thursday, was played largely between the two 22m areas.

There appeared no game breakers in either side, so good defence prevented players breaking away.  It was 13 minutes before Pretoria broke through into the Framesby 22m area, but they were thwarted from scoring.

At half-time Framesby led 6-3 after two well-struck penalties by fullback Peter Scholtz, to one by Pretoria’s fullback Justin Cross, the latter just on half-time.

The game livened up when Pretoria flyhalf Dylan Thompson ghosted through a gap, sprinting to score the first try of the game.  This was converted, again by Cross, for a 10-6 lead.

Framesby forwards powered their way to the Pretoria line and, with some pick and go, keeping the ball in hand, prop Morne Prince forced his way over.  The conversion was taken by Andre Gerber to put the Eastern Cape side back into a 13-10 lead.

Light drizzle made the ball slippery, but Framesby managed to hold on to their narrow three-point lead in an evenly contested and exciting contest.