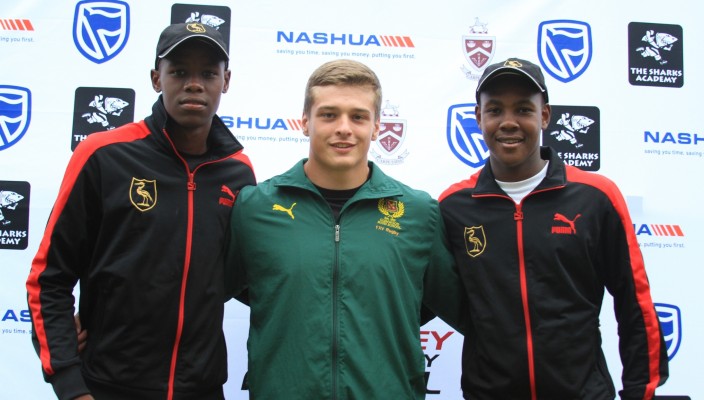 A highly successful ninth Kearsney Easter Rugby Festival wrapped up with two teams which remained unbeaten at the festival and the announcement of three players who each received bursaries to the Sharks Academy for 2017.

Valued at over R100 000 each, recipients are Glenwood prop Renier van Rooyen and two Dale College players, fullback Aphelele Fassi and centre Sibulele Mbana. This includes a contract with the Academy in 2017, accommodation and a tuition bursary with one of its education partners.

In announcing the awards Etienne Fynn, managing director of the Academy, said the standard of rugby this year had been excellent, as had come to be expected of the festival.

“Even though there were some high scoring matches, this was more about the quality of play, than that the teams had been mismatched,” Fynn said. “We believe that a player who shines at school doesn’t necessarily have the attributes to play senior rugby. But we believe these three boys will meet those requirements.” He said there had been an excellent pool of talent on display at the festival this year.

At the end of the festival two teams remained unbeaten: Selborne College from East London and Glenwood High School from Durban. Dale College went into the final day unbeaten, but were overpowered 5-32 by Glenwood in their third day clash. Hosts Kearsney were also unbeaten until Monday, but went down 10-24 to HTS Middelburg in the final fixture of the festival. Middelburg’s win against the hosts was their only victory at the event.

The three-day event was well supported with excellent crowds who were able to enjoy a high standard of competitive rugby in good weather. It was a successful event for organisers and sponsors Standard Bank, Nashua Durban and the Sharks Academy.