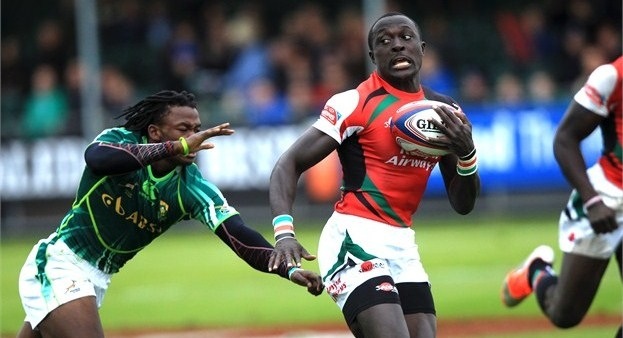 Injera: Kenya to ‘tick the boxes’ in Dubai

On this year’s HSBC Sevens World Series fans will once again have their chance to get involved through social media by voting on their favourite try from each of the nine rounds.

Collins Injera was the first recipient of this award in the new season after his first of three tries in Australia was voted as the fans’ favourite from the Gold Coast Sevens.

It was a good weekend for the Kenyan, as Injera’s three tries over the two days saw the winger move into fourth in the all-time leading try scorer charts.

With 162 tries to his name, Injera is in esteemed company, sitting behind Fabian Juries, Ben Gollings and Santiago Gomez Cora having moved ahead of Samoa’s Mikaele Pesamino.

“I don’t remember a lot to be honest from the time, but after watching the replay I can see it was a good try,” said Injera speaking four days out from the Emirates Dubai Rugby Sevens.

“I have been working on my power and I am glad it went the way it did. I went around the winger and there was nothing else I could do at that point. I couldn’t step, I couldn’t run anymore so I just had to go through.

“I would like to thank the fans for voting for my try as the first person of the season to receive the award, and I am really proud.
“When I get the ball the first thing I think about is just to score, either on the wing or in the middle of the field. But when I began playing for Kenya I was in the centre and not that fast. Now I am the fourth leading try scorer and I am hoping to continue playing my role in the team as a senior player and add to that tally this weekend.”