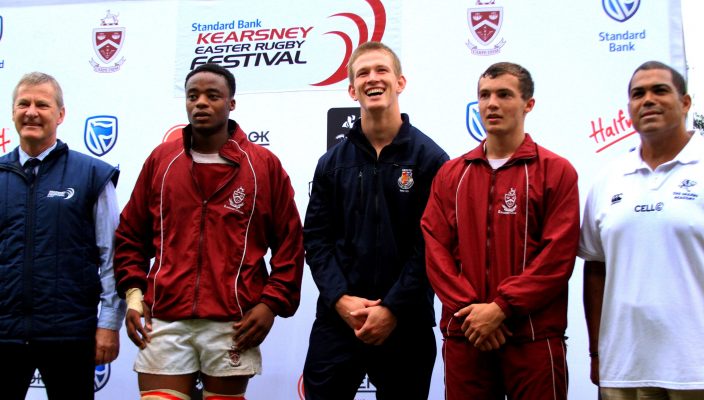 A highly successful 11th Standard Bank Kearsney Easter Rugby Festival wrapped up today (Monday) with three teams ending the festival unbeaten and the announcement of four players who each received bursaries to the Sharks Academy for 2019.

Two local teams, Durban High School and Glenwood, as well as Hoerskool Framesby from Port Elizabeth, were unbeaten at the festival.

Glenwood was presented the floating trophy for having played the most attractive rugby at the festival.

Valued at over R100 000 each, the bursary recipients are Glenwood flank Lindokuthle Luthuli, HTS Drostdy centre Christie Grobbelaar and two Kearsney players, flank Sibusiso Sangweni and fullback Jacques Odendaal.  The bursary includes a contract with the Academy next year, accommodation and a tuition bursary with one of its education partners.

Announcing the awards, Sharks Academy managing director Etienne Fynn said spectators had been treated to some outstanding rugby over the weekend, with many evenly matched teams which made for exciting games.

“The results from DHS were a great surprise, with the team remaining unbeaten against three traditional Eastern Cape powerhouses,” Fynn said.

It was good to see so many returning schools to the Kearsney festival, which was the ultimate compliment and a measure of what the festival offered schoolboy rugby in South Africa, he said.

In a cracker final game of the festival, Kearsney dominated the match against Pretoria Boys High.  With a half-time 19-7 score in the hosts’ favour, they won 40-33 after Pretoria scored a converted try after full-time.

Despite Saturday’s misty, wet conditions, the festival was well supported on the three play days and spectators were able to enjoy a high standard of competitive rugby.  It was a successful event for organisers Kearsney College and sponsors Standard Bank, Halfway Ford, Hendok and the Sharks Academy.