Shortly after Desmond Davis, an Association Football enthusiast, retired in March 1931, plans were laid by his successor and “father” of all sport at King Edward , “Robbie” Robinson to start rugby at the School in the 1932 season. To this end he enlisted the help of a “god-father” in the person of Eric F.K. Tucker. He persuaded the Transvaal Rugby Union to level and grass an ugly dusty slope on the School grounds to transform it into two rugby fields to be available for the 1932 season.

On 27 April 1932 the School’s fields were opened when the Chairman of the Governing Body, and ex-Matie, H.J. Hofmeyr kicked off the first ball. On that occasion Frank Robinson expressed the wish that King Edward boys would repay the Transvaal Rugby Union in due course by reproducing in senior rugby, what they had learned while at School.

As early as 1931 the School rugby colours had been decided. For the 1st XV cardinal red jerseys with white collars and a badge and white pants and red and white ringed socks. The rest of the School were to play in red white and green ringed jerseys with dark blue pants and black stockings with red and white tops. And so it has continued to this day with the obvious change to the socks and to white pants for the whole School. It was only in 1935 that the badge was incorporated.

A WHILE AGO
Bruce Macdonald who left the School in 1939 was selected for Transvaal and is the first ex-K.E.S. boy to have played in a Currie Cup final in 1947. The 1956 side produced two provincial players via. A. Miller and J. Faber, while A.H. Bladen was a member of the 1961 side, and he was eventually selected for the Junior Springboks. Norman Picker’s (later a Transvaal player) 1968 side with a 100% record after 17 games played. A few other names from past decades that played representative rugby are: L. Barnard, G. Lawless, E. van der Merwe, R. Keil, S. Marot and D. Malherbe

PRESENT DAY
There are many old boys plying their trade as rugby players, especially recently in the U19 and U21 provincial tournament. However in the senior set up we have: L Ruiters (Cheetahs Vodacom Cup), J Meyer (Sharks Vodacom cup), W Mjekevu (Lions, SA 7’s and SA U20), S Mtubeni (DHL Stormers), B Habana (DHL Stormers & Springboks & J Van Niekerk (Toulon)

PRESENT DAY
The school currently has 27 sides which means we have 405 boys playing each week. The U14 age group this year has up to an “I” side which is amazing in terms of depth for the school but more importantly all of these boys are enjoying the benefits of team work as well as the camaraderie that is associated with a sport like rugby.

It is vital to us that all the boys get the opportunity to play but it is also important to us that we do well in rugby. We compete against very tough opponents and traditionally have great rivalries with many top all boys school within and outside the provincial boundaries.

The boys are therefore exposed to top class opponents all the time and that is why we believe that many of our boys are gaining provincial school and SA school selection recently.

The most experienced Springbok player in the 2012 Springbok Squad is KES Old Boy Bryan Habana, with 74 caps (9 June 2012). 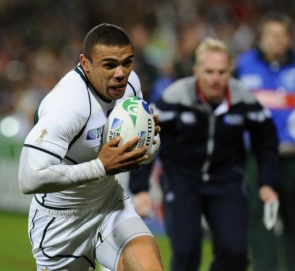 Last updated 13 June 2012 (please reply on this post or email media@schoolrugby.co.za if any information is outdated)

KES Old Boy selected to England Counties Rugby Squad!
(23 May 2012)
Congratulations to King Edward VII School Old Boy, Jared Saunders (Class of 2009) on his selection to the England Counties Squad for the East African Tour. Jared currently plays for the Saracens. The young prop looked at home in the Premiership just a year after joining the club on trial. The South African born prop joined the Academy on a full time basis for the 2010/11 campaign.

The England Counties have named their 26-man squad for next month’s three match tour to Uganda and Kenya.

Eleven counties and 15 clubs are represented within the squad which contains 12 debutants. The England Counties squad is the representative flagship of the county and community game and since being founded in 2002 has visited North and South America, Europe and the Far East.

Congratulations Jared-the KES Community will be following your career with keen interest and wish you all the best!

The Stormers had to fight hard for their 24-19 victory over a gutsy Lions team in their Super Rugby match at Coca Cola Park on Saturday.

The visitors started off strongly as they scored the first try of the match a minute after the kickoff, with hooker Tiaan Liebenberg scoring in his 50th Super Rugby match for the Stormers, and Joe Pietersen converting. The Stormers built on that positive momentum 12 minutes later with Bryan Habana becoming the only South African player to score 50 Super Rugby tries with a classy try. Nick Koster broke picked the ball up from a scrum then offloaded to Habana who chipped the ball ahead and touched down as the ball bounced into the goal area.

His official first International game is this Saturday against Holland.

Congratulations to another KES boy playing in the international arena!