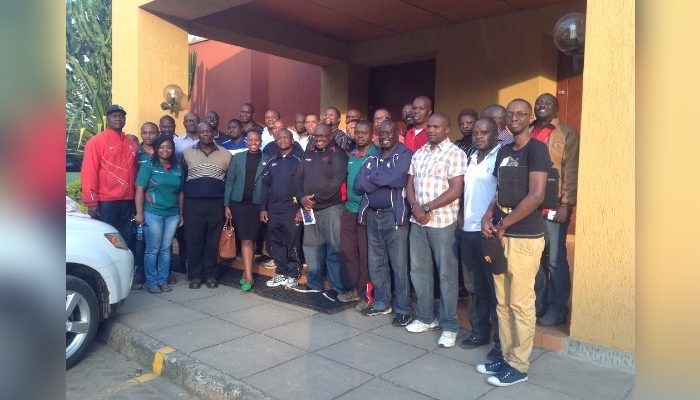 The Kenya Rugby Union hosted its second National Development Conference on 1st and 2nd July at the Strathmore University Auditorium. Key stakeholders of the Kenya Rugby Union were in attendance with an aim of growing rugby across the country as well as bettering the game so that Kenya is able to produce great rugby players.

KRU Chairman Richard Omwela in his opening remarks said, “The main purpose of this conference is to share with you some of the things we plan to do.  In order to be on the right direction, we need to have a plan first.”

Celebrated thespian and playwright John Sibi-Okumu (pictured above) then presented his keynote address. His message to the stakeholders was that it is their job to expose as many people to rugby as they can,since that is the main way that rugby will grow in this country. To the players, he urged them to have self-belief regardless of the team they are facing. Self-belief is what takes you far in the milestones ahead of you.

Former Kenya Sevens Coach Felix Ochieng was next and he addressed the difference between grassroots and elite rugby. ‘Number of rugby players doesn’t translate to the number of skilled rugby players a team may have.’ This is something that made some of the coaches present realize that they need to improve the skill levels of their players. Ochieng said that due to the high number of children willing to play rugby, it has now become very important to improve skill at the tender age.

Rugby aficionado Richard Nyakwakwa gave a presentation on “Mashinani Rugby” , an approach he termed as being vital in getting more people in playing the game, purely for fun and participation purposes.

Resolution Insurance CEO Peter Nduati spoke about sponsorship and its effects on the brand and the team. His experience as a rugby player as well as an employer of rugby players has taught him that rugby players extend the discipline they practice on the pitch to the working places.

Mike Lucas, a representative of the Kenya Cup caucus addressed the by-laws of rugby and touched on the new laws that will be adapted when Kenya Cup resumes later this year. He also mentioned some of the fines that teams will face if they fail to honour fixtures as well as participating in non-sanctioned tournaments. The Kenya Cup 2016/2017 will have a new structure. Tier one will have 12 teams and each team is required to have a team two as well as an under 20 team.

Godwin Karuga concluded the day as he spoke on tournament planning and administration. He mentioned some of the things that people tend to forget while holding a tournament and their crucial importance.

KRU Secretary General would kick us off on Day two together with Nills Achayo as they discussed the way forward towards a new constitution. It was important to emphasize that before the constitution is finalized, the committee would seek the input of every club countrywide in finding ways that make it better. All the clubs also need to have their own constitution that they live by.

Johnbosco Muamba then addressed issues faced by referees as well as trainers, he suggested ways that some of these challenges may be faced in ensuring everyone in the rugby circles is well trained before handling any situation. Mike ‘Tank’ Otieno addressed the competition structures with emphasis on development. He said that when dealing with academies, it is important to have an exit strategy that helps the players adapt easily to their next level which would be club level. ‘If Kenya wants to play in the World Cup and stay consistent in it, we need to invest more on the younger players.’

Impala Saracens Director of Rugby Fred Ollows gave a presentation on how coaching philosophies impact player development and skill sets. The importance of philosophies is that they give clarity to the player, gives direction and focus which helps when they take on the pitch, philosophies also guide behaviour. Some of the known core values of rugby include; integrity, Respect, Solidarity, Passion and discipline. Ollows also stated some of the core values in motion which were; play to win but not at all costs, win with dignity and lose with grace.
Paul Barasa, a PR Practitioner ended the day by giving tips on How Kenya Rugby can Leverage on PR. He stated some of the things that are news drivers in the media industry which were, team performance, game results and also signing of partnerships. He also told the present stake holders that it is very important to sort out any arising indoor problems early enough so as to prevent negative rumours spreading. Covering up of such problems doesn’t last long so it is of high importance for them to be dealt with upfront.

Secretary General Oduor Gangla, in his closing remarks, thanked the members for their input and hopes that they keep working together to better rugby in the country.

Moses Ndungu from central region was named the Referee of the Year during the inaugural Kenya Rugby Referees Society (KRRS) gala evening held on Friday 1 July, 2016 at Pride Centre, Westlands.

Ndungu received the most votes from the 80 active referees, out of the 112 referees under the KRRS umbrella.

“This is a very humbling moment in my career. It is overwhelming to be named the best and I appreciate the award,” said Ndungu, the Githiga high School Coach, who has been a match official for only four years.

Adrian Munyua from Nairobi Region was named the most improved referee as Adelaide Nasambu and Constant Cap took home the Sports Woman and Sports Man of the Year Awards, respectively. Max Adaka, the captain of Kabras Sugar walked home with the Club’s Award.

Speaking at the function, KRRS Chair Mwangi Karimi said, “I am glad to be the first chairman to be part of this inaugural gala. This is what we have worked for over time,” he said at the function.

“The essence of these awards is to appreciate referees. Many a time the referee are always subject to bad things. Without referees we wouldn’t have a game, nor results. It is for us to look in retrospect and redefine who we are as referees –  to recognize that the referee is an integral part of the game,” he said.

Past referees were up for the award.

The Club Award went to Max Adaka , the captain of Kabras Sugar.  As explained by KRRS, the award went to the leader of a club who, as a leader of the playing unit, carried himself in a good manner which also reflected to the club standards at any given time during a match.

Adrian Munyua from Nairobi Region was named the most improved referee after beating Beril Akinyi and Billy Ochieng from Rift Valley Regional Society, Abel Lagat from Western and Linus Kinuthia from Central.

Nicholas Gachoya scooped the Chairman’s Award, a pick directly made by the Chair Mr. Karimi.

“This award goes to an individual who played a silent and salient role,” said KRRS Chair as the award was picked by Sammy Kariuki on behalf of Gachoya who was not present.

Sports Woman Referee of the Year

This award went to Adelaide Nasambu who beat four others to the award. Other than Adelaide the short list included Sarah Otieno and Peris Mukoko – all from Nairobi, as well as Beril Akinyi and Noreen Liyosi, both from Rift Valley Region.

Sports Man Referee of the Year

Constant Cap was named the Sportsman of the Year after beating a strong cast that had Godwin Karuga, Raymond Oruo, John Bosco Muamba and Andrew Karani.