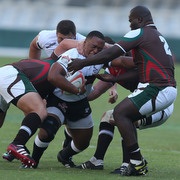 The KwaZulu-Natal Duikers will attempt to defend their Central Amateur Provincial Championship title on Friday after booking their place in the final against Griquas Central in Kimberley.

The team were crowned the 2011 champions, but were unable to stake a claim for title last year as the competition was called off early due to waterlogged fields.

But after making their way through this year’s tournament unbeaten, the side booked their final berth in what should be a thrilling clash against hosts, Griquas Central.

The KZN Duikers were emphatic in their dominance in the second half of their round-two clash on Wednesday after staging a dramatic comeback from 14-13 down against Free State Central to claim a 39-17 victory. The team were impressive in their attack as they ran in five tries to only two by Free State Central. However, this was largely due to the impact made by the bench as replacements Buzwe Mpotwo, Warren Randall and Brandon Bailing all earned tries. They supported this with a solid defensive effort, which limited the opposition to a penalty after the break.

Griquas Central produced a similarly impressive showing against Griffons Central on Wednesday to register a convincing 41-20 victory. The home team started the clash strongly and managed to build up an encouraging 28-10 lead in the first half. Scrumhalf Martinus Erasmus and lock Jan Breedt each crossed the tryline twice, with the side earning five tries in total, while their flyhalf had a successful day with the boot as he slotted over five conversions and two penalties for 16 points.

In the plate final on Friday, KZN Rural will meet Griffons Rural, while Free State Central and Griffons Central will battle it out in the third and fourth-place playoff, and Griquas Rural and Free State Rural will face each other in match played purely for pride.