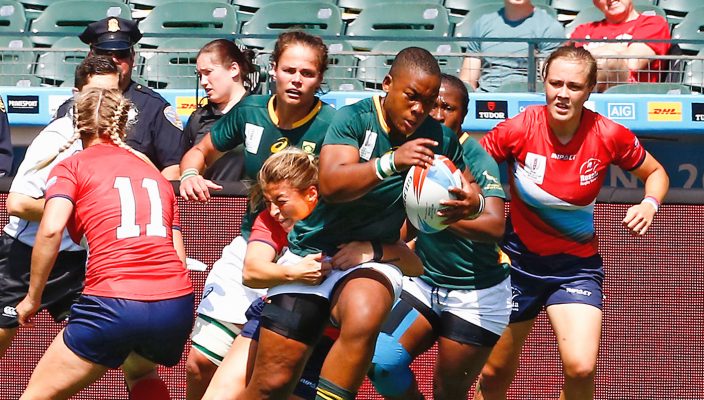 Babalwa Latsha will take over the Springbok Women’s captaincy for their second match in Pool A of the Rugby Africa Women’s Cup against Namibia on Thursday.

The Test, which will be broadcast live by SuperSport, will kick off at 15h00 at City Park in Cape Town.

Latsha takes over the reins from regular captain, Nolunsindiso Booi, who was in charge when the Bok Women beat Zimbabwe by 108-0 at the same venue in the tournament’s opening match last Friday.

Booi was ruled out of the Namibia match due to a bout of flu and her replacement at lock, Lerato Makua, will be the only change to the starting team that overpowered Zimbabwe in spectacular fashion, scoring 17 tries in their win.

Makua made her only Test appearance in the Springbok Women’s jersey in November, when she played off the bench against Wales in Cardiff, while Latsha is no stranger to the captaincy, having led the team in 2018 and 2019, and will run out in front for the eighth time in her 13th Test.

There are two changes on the bench as well as Springbok Women coach, Stanley Raubenheimer, opted for a five/three split this time around, having started with six forwards and two backs on the bench against Zimbabwe.

Karthy Dludla (lock) drops out to accommodate the extra back in Simamkele Namba. Like Makua, Namba’s Test debut was against Wales during the November tour last year. Both Makua and Namba had their last outing for the Bok Women against the Barbarians at Twickenham.

Roseline Botes will also come onto the bench at hooker in place of Luchell Hanekom, who picked up an injury in training this week. The uncapped Hanekom was not called off the bench for the Zimbabwe test, nor was Azisa Mkiva (prop) and Nokubongo Siko (flank). Both are on the bench again and could make their Test debuts if called upon.

For Springbok Women’s forward’s coach, Eddie Myners, the loss of Booi has given the coaching team a chance to build on their squad depth.

“Obviously it is never nice to lose you captain and in our case such an experienced player, but on the flip side, it does give Lerato an opportunity to step up,” said Myners.

“She is still a young player, but she will have the responsibility to call the lineouts and I am excited to see her in a more senior role. We want to build on our depth and give the younger players experience where the situation allows it and this is such an opportunity.

“We are lucky to have Babalwa who can step into the captaincy role. She has done so many times before and we have confidence that she will be able to handle the captaincy with her other responsibilities on the field. We do have a strong leadership group in the team, and they will assist Babalwa in that regard, so I don’t foresee any problems with that.”

This will be the historic first Test between the women’s sides of South Africa and Namibia. The Bok Women last week laid down a new marker in beating Zimbabwe 108-0 in their first match against each other, notching up South Africa’s highest test victory ever and the 10th highest in the history of women’s internationals.