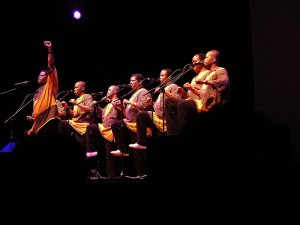 Shosholoza has become a national traditional song in South Africa for past decade which was sung for the first time by the South African fans during the 1995 IRB Rugby World Cup.

“Shoshaloza” has no specific meaning & was derived from the onomatopoeic & repetitive sound of the train wheels transporting the migrant workers back to their families in Rhodesia (Zimbabwe).

Wena u ya baleka

Wena u ya baleka

Work, work, working in the sun

We will work as one

Work, work, working in the rain

Push, push pushing on and on

There’s much to be done

Push, push, pushing in the sun

We will push as one.

This song meaning: “Shosholoza, this train is gaining speed & steaming for South Africa”.