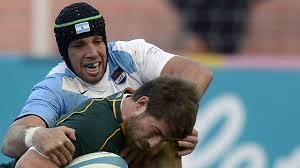 A SANZAR Judicial Officer has found Leonardo Senatore of Argentina guilty of contravening Law 10.4 (m) Acts contrary to good sportsmanship after he was cited during the match at the weekend between Argentina and South Africa in The Rugby Championship.

The incident occurred in the 61st minute of the match between Argentina and South Africa at Estadio Malvinas Argentinas in Mendoza on 24 August 2013.

The SANZAR Judicial Hearing was held before Judicial Officer Terry Willis via video conference with the assistance of former professional player Paul Thomson from New Zealand.

After hearing the evidence of Doctor Andrea Boon on behalf of the player, the South African Team Doctor Craig Roberts, the Referee Steve Walsh, together with UAR Board Member Agustin Pichot and Senatore himself, the Judicial Officer was satisfied on the balance of probabilities that biting took place to the forearm of the South African player Eben Etzebeth such as to constitute a breach of the laws of the game of rugby. Accordingly, the citing complaint was proven.

The Judicial Officer heard that Senatore had an unblemished record having played 19 Tests for Argentina. After considering the significant provocation caused by the actions of Etzebeth making contact to the head of Senatore, the level of offending was determined as low end.

In the absence of any aggravating features and significant mitigating factors, it was determined that a seven match suspension was appropriate in the circumstances. Bearing in mind the player’s playing schedule, he will miss four Test matches in The Rugby Championship and three games for Worcester Warriors.

Accordingly the player was suspended for nine weeks up to and including 27 October 2013.