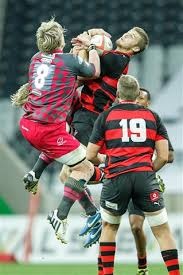 Leopards, Cavaliers take a knock, while Pumas march on

Defeats for the Leopards and Regent Boland Cavaliers in the Absa Currie Cup First Division this weekend dealt a knock to their campaigns, while the Pumas powered their way further ahead to remain in pole position for the top spot on the log.

In the weekend’s matches, the Steval Pumas thumped the Down Touch Griffons 42-24 in Welkom, the EP Kings defeated the Leopards 44-26 in Potchefstroom and the Border Bulldogs surprised the Regent Boland Cavaliers with a 21-19 victory in East London. In the other match, the SWD Eagles beat the Valke 58-42 in George.

These results allowed the Pumas to extend their lead to 13 points at the top of the table with four pool rounds to go, while the Leopards dropped down from second to fourth place. The SWD Eagles and EP Kings, meanwhile, moved into second and third place respectively.

Given the Pumas’ impressive run they are virtually guaranteed of a semifinal spot, while the Cavaliers face hard work ahead to sneak into the semifinals.

In Welkom the Steval Pumas overcame a tightly-fought first half against the Down Touch Griffons as both teams were reduced to 14 men following yellow cards, to secure their 10th back-to-back victory.

So close was the match the Pumas scored five tries to four by the Griffons, but goal kicks proved to be the big difference for the visitors on the scoreboard.

The teams each scored two first-half tries, but two penalties by flyhalf JC Roos handed the Pumas an 18-12 lead at the break.

The visitors built on their lead in the second half as they outscored the Griffons three tries to two, but another penalty by Roos to add to his three conversions for the match and one by Carl Bezuidenhout allowed them to finish the match with a convincing lead.

The Leopards started strongly in Potchefstroom with two early tries to take a 12-3 lead against the EP Kings. But three tries in 14 minutes for the visitors earned them a 25-12 lead at the break.

The second half took a similar shape with the Leopards running in two tries in the third quarter, but the Kings took control of the match soon after and made good use of their try-scoring chances to take their tally for the match to six.

Pumas flyhalf George Whitehead added to this with the boot as he slotted over four conversions and two penalties for 14 points.

In East London the Border Bulldogs showed immense character to create an upset against the Regent Boland Cavaliers despite the home side entering the clash with only one victory.

The match proved to be an arm-wrestle from the outset, with the first half dominated by penalties as neither side gave an inch.

The Bulldogs took 13-9 lead at the break thanks to a superior start in which in they scored the only try of the first half, while fullback Dale Sabbagh and Boland flyhalf Eric Zana were involved in a kicking duel.

Tries by Boland No8 PJ van Zyl and captain Franzel September, however, to only one by the Bulldogs in the second half, resulted in the match coming down to kicks.

And with Sabbagh having converted one of his two conversions to none by Zana, Border emerged victorious.

The clash in George proved to be a try festival as the SWD Eagles and Valke showed fantastic skills on attack to run in a combined total of 14 tries.

Such was the frantic start to the match five tries were scored in the first 20 minutes – three of which were by the Valke, who have been languishing at the foot of the log.

The Kempton Park side continued to stamp their authority as the half progressed and secured two more tries before the break to take their tally to five and build an encouraging 35-22 lead.

But the balance of power shifted in the second half as the Eagles controlled proceedings and earned the rewards with two tries in two minutes by prop Roy Godfrey.

By the 70th minute the Eagles had racked up four tries for the half and scored another four minutes from time to take their total for the match to eight.

Unfortunately for the Valke they were only able to cross the line only once in the second half, which dashed their hopes of a surprise victory.