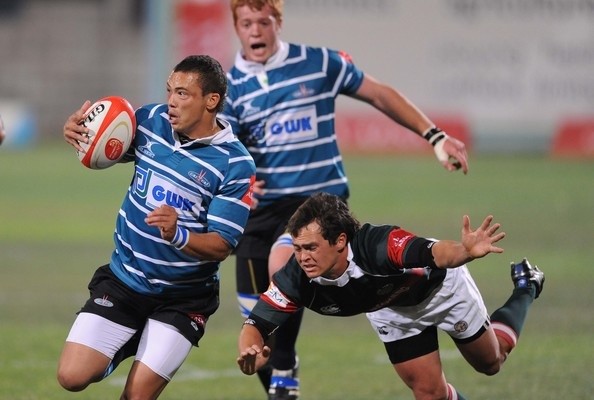 The Leopards, Down Touch Griffons and Hino Valke were all on the winning side on Saturday when the Absa Currie Cup First Division restarted following a break from the qualifying round.

At the Profert Olen Park in Potchefstroom, home team Leopards overcame a narrow halftime deficit of 15-16 to eventually triumph by 36-31 over the SWD Eagles. In the HT Pelatona Projects Stadium in Welkom the Griffons ran in ten tries to post a huge 62-24 win over the Boland after leading 24-10 at halftime.

The Hino Valke produced a scintillating second half to wipe out an 8-19 halftime deficit to eventually win comfortably by 48-27 against the Border Bulldogs at the Barnard Stadium in Kempton Park.

Flank Juan Language ran in a hat-trick of tries as the Leopards fought back from a narrow halftime deficit on their way to a 36-31 (halftime 15-16) win in Potchefstroom. The Eagles shaded the first half as they took a narrow one-point lead to the break.

Language completed his trio of tries inside 60 minutes while tighthead prop Jon-Roy Jenkinson dotted down twice as the hosts scored five tries to the three of SWD. Fullback Leighton Eksteen kicked two conversions and four penalties for the visitors to end with a personal haul of 16 points.

The victory saw the Leopards push their record to six wins from six while the Eagles have now won just one of their previous six.

The Down Touch Griffons ran rampant on their way to a comprehensive 62-24 win against the Boland Cavaliers at the HT Pelatona Projects Stadium in Welkom.

Border led 24-8 at one stage but it was the yellow card to replacement prop Siyamthanda Ngande which helped the home side to a comfortable win in the end of an absorbing fixture. The Valke scored three tries while the prop was in the sin-bin.

Flyhalf Anrich Richter gave the hosts the perfect start with a drop goal in the first minute but then it were all Border as his opposite number, Masixole Banda, slotted three penalties and converted a try from right wing Makazole Mapimpi in the 21st minute. Border fullback Logan Basson also slotted a long-range penalty to give the visitors a healthy 19-3 lead with 30 minutes on the clock. But Valke flank Jacques Verwey scored the first of his two tries to close off the half.

Border restarted strongly when Sipho Nofemele stormed down the left wing to score in the corner to extend the lead to 24-8. The yellow card to Ngande opened the floodgates as Friedle Olivier barged his way over for his second five-pointer while Johan Pretorius, who had replaced Jaco Snyman, and inside centre Willie Odendaal capped off a frenetic final 10 minutes which saw the home side score 19 points.