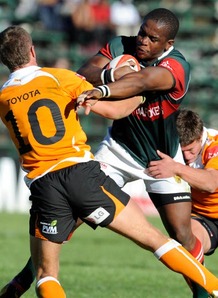 The Leopards this weekend reclaimed their second-place standing on the Absa Currie Cup First Division log table after the results worked in their favour in an exciting round of matches. However, given the log-jam at the top of the table with five pool rounds remaining they will face tough competition for a home semifinal going forward.

The Steval Pumas extended their lead at the top of the log to 11 points after securing a bonus-point victory against the Border Bulldogs in East London, while the Leopards hopped into second place thanks to their 38-27 away-victory against the Valke. This was assisted by the Regent Boland Cavaliers’ edging the SWD Eagles 35-30 in Wellington.

In the other match, the EP Kings thrashed the Down Touch Griffons 63-7 in Port Elizabeth to dent the Welkom team’s hopes of sneaking into the semifinals through the back door.

In East London, the Steval Pumas overcame a determined first-half display by the Border Bulldogs to claim their ninth victory of the season and secure their sixth bonus-point for tries. The Bulldogs started the clash strongly with prop Blake Kyd opening up the scoring in the 15th minute after crashing over the tryline, while fullback Dale Sabbagh added a penalty to take their points tally to 10 for the half. They supported this with a solid defensive effort, which limited the Pumas to only two tries.

But the Pumas took control of the match in the second half and earned another four tries for their efforts. Flyhalf JC Roos, meanwhile, kept the scoreboard ticking as he slotted over all six conversions to push their score to 42. Unfortunately for the home team, they failed to recover from this and finished the match with a scoreless second-half.

The clash in Port Elizabeth was one-sided from the start as the EP Kings delivered a fine all-round performance to outplay the Down Touch Griffons completely. The Kings racked up an impressive nine tries thanks to their innovative attack and ability to use their chances, while the Griffons had only a first-half try by Japie Nel to show for their efforts.

Unfortunately for the Kings, the victory failed to improve their fourth-place log position. However, it left them only one point behind the Eagles and three points behind the second-placed Leopards, meaning they could still secure a home semifinal.

The Leopards, meanwhile, survived a strong second-half fightback by the Valke at the Barnard Stadium in Kempton Park to secure their 38-27 victory and climb up the log table. The Leopards dominated the first half as they ran in three tries – the first of which was in the seventh minute – for their 21 points, while the Valke’s only points were scored from a penalty by Juan Kotze.

The Leopards extended their lead in the second half as SA Under-21 wing Luther Obi scored two tries and replacement lock Stephan Bezuidenhout one, to push the match beyond the Valke’s reach. With the victory in the bag, the Leopards let their guard down while the Valke upped the ante, which saw them run in an impressive four tries in 21 minutes to salvage some pride and secure a bonus point.

The battle in Wellington was fierce as the Regent Boland Cavaliers and SWD Eagles threw everything at each other with an eye on semifinal places. The Cavaliers had an edge in the first half thanks to an early try by captain Franzel September, which bolstered their confidence. They continued to capitalise on their point-scoring chances with Jonathan Francke crossing the chalk in the 12th minute to increase their lead. But the SWD Eagles matched these efforts in the second quarter to earn two tries of their own. With two minutes left in the first half Boland’s Cheswin Williams ran in their third try for a 22-15 lead.

This, however, was short-lived as the Eagles cancelled it out with their third try one minute into the second half. Both teams crossed the line for a fourth time in the half, which forced the game to come down to goal kicking. And with Boland flyhalf Eric Zana slotting over three penalties and three conversions in total to the Eagles two penalties and two conversions, the Boland side emerged victorious.

Unfortunately for Boland, however, they remain in fifth position on the log.