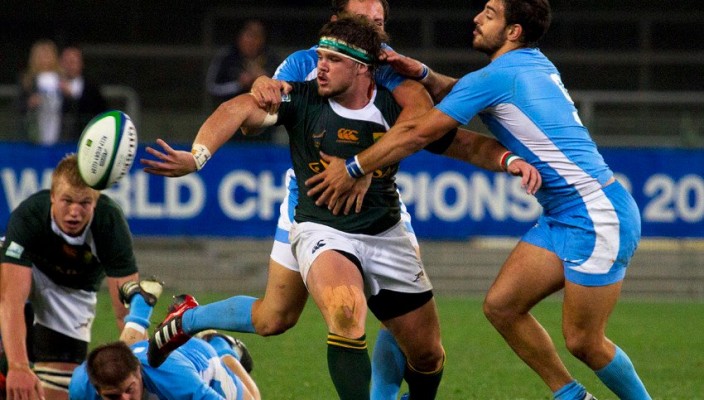 The Los Pumitas led 17-5 at halftime and their win enabled them to clinch the series 2-1. The South African training squad managed to win the opening encounter 26-3 in Corrientes and then suffered a 42-27 loss at the same venue in the north eastern region of Argentina.

Both countries used the series to fine tune their preparations for the IRB Junior World Championship which will be held during June in France.

One of the huge positives for the SA U20 coaching staff, headed by Dawie Theron, must be the fact that their squad managed to score more tries than the Los Pumitas in each of their three matches.

Despite finishing on the losing side, South Africa managed to score four tries in each of the previous two tour matches.

Similar to Tuesday’s defeat, it was again the accurate boot of Argentine flyhalf Patricio Fernandez which ultimately proved the difference between the two sides. The Los Pumitas pivot contributed 17 points by virtue of a try, three conversions and two penalties to guide his side to a narrow victory.

Argentina again raced into a lead at halftime, this time leading 17-5 after Paz Joaquin (centre) and Cordero Santiago (fullback) had each scored a try while Fernandez succeeded with an early penalty and the two conversions. SA captain Neethling Fouche (prop) finally managed to force his way over the try line five minutes before the break after a period of sustained SA pressure.

South Africa show much better discipline and their forward managed to keep the strong Argentinian forward charge in check for most parts of the match.

Scrumhalf Stefan Ungerer gave his team the perfect start to the second half when he scored the visitors’ second try a minute after the restart to edge them closer at 17-10.

However, Fernandez replied with a converted try and two penalties to stretch the Los Pumitas lead to 24-10, before a burst of two tries through Justin Geduld (replacement centre) and Robert du Preez (flyhalf) saw South Africa close the gap to within five points (27-22).

Afterwards, Theron said the main objective was for the team to have the opportunity to play together and to bond as a team.

“We came very close in both matches and I know our guys have learnt a lot from this tour. Results are what count in the end, but we must keep in mind that this is essentially a new squad and we managed to give everyone a chance to play.

“I am pleased that we were able to keep our discipline in check and managed to create enough opportunities to score four tries,” said Theron.

The South Africans return home on Monday morning. The team lands at 8:30am in Johannesburg from Buenos Aires while the Cape Town-based players and management, including Theron, will arrive in the Mother City at 12pm.