Ma’a Nonu suspended for one week 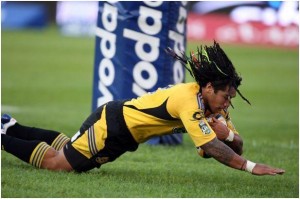 Hurricanes second five eighth Ma’a Nonu has been suspended for one week after appearing at a SANZAR judicial hearing in Wellington today.

Nonu was sent off during the Hurricanes’ season opener against the Highlanders at Wellington’s Westpac Stadium on Friday night.  The Highlanders won 14 – 9.

After considering video evidence and hearing submissions from Nonu and his representatives, SANZAR Judicial Officer Nigel Hampton QC upheld the citing on the basis that Nonu did not use his arms in the tackle and the first impact was with his shoulder into Cowan’s neck.

Mr Hampton said he believed the tackle was at the lower end of the scale of seriousness, but mitigating factors included Nonu’s acceptance of guilt, and a written submission from Cowan in support of Nonu.

Nonu is suspended from playing all rugby up to and including Monday 28 February, meaning he will not play in the Hurricanes home match against the Crusaders this weekend.