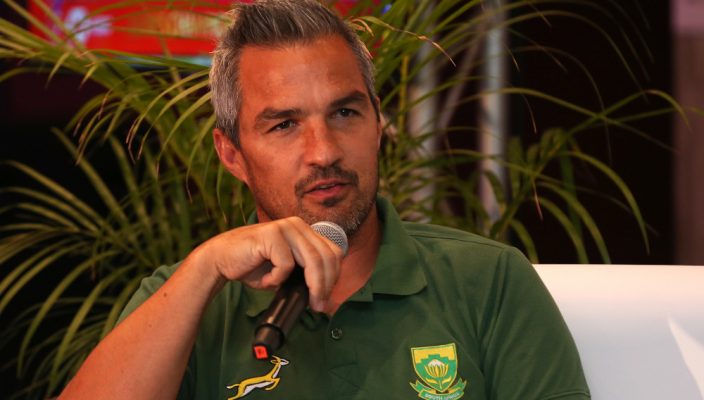 Nelson Mandela University coaches were given a fascinating insight into what makes the Blitzboks rugby squad tick through a webinar with head coach Neil Powell last week.

The webinar, done via the Zoom application, was organised by Madibaz Sport to give coaches and managers at the varsity an opportunity to understand how one of South Africa’s most successful sports teams is run.

It was an opportunity to learn how to apply the values behind the team’s success to their work with the Madibaz student-athletes.

One of the major aspects they focused on, he said, was to ensure that they had a proper team culture into which everyone bought, which was a trait of all successful sports teams.

“The big thing about having a team culture, though, is that it is never complete,” said Powell. “It’s never at 100 per cent because there is always room for improvement.”

He said the Blitzboks’ team culture was developed after a ground-breaking meeting following a tournament in 2008 when Paul Treu was coach.

“For example, family means we are a band of brothers ready to support each other on and off the field, while diversity is something we embrace in our bid to be the number one team in the world.

“The important issue is that it must be all-inclusive so everyone buys into the values. So when you discuss it, everyone who plays a role in the team must be involved.

“In this way you keep them accountable for their actions because they have been part of developing the culture.”

He added it was essential to revisit the team culture every year to make sure “we are still sticking to our values”.

Powell said a vital aspect was that the values were worth nothing if the top management and the senior players “don’t live this culture”.

“You can’t expect the 19-year-old in the squad to be on time for meetings if I, as head coach, am not on time.

In terms of his role as a mentor, Powell said it was important to have a coaching philosophy.

“This is something you have that you stand for because in coaching, either in success or in failure, you can easily lose your focus and become someone different to who you were when you started coaching.

“You can then go back to that philosophy and remind yourself what you stand for and how everything started for you when you became a coach.”

He said the philosophy applied to every member of the management team and one of their main aims was to not only develop a better player, but also to create a better person.

When it came to producing results on the field, Powell said “winning is a swear word in our team”.

“Our focus rather is to talk about success and that translates into the implementation of your processes,” he added.

“The aim is to do your job to the best of your ability, so if the effort is good and implementation of the processes is good, the result will look after itself.”

It was equally important, he felt, to ensure the players had time for fun and enjoyment.

“Besides the fun you need to create off the field, there must be enjoyment on the field.

“When you get to the venue the focus and concentration do rise, but there must still be smiles on their faces. I always know if the guys are not enjoying themselves and too tense, then we are in trouble.”

They also adopted an inside-out approach, which meant the player had to be able to drive himself to become the best he could be.

“You need that element to try to become number one in the world, rather than someone looking over your shoulder to check if you are doing the hard yards,” said Powell.

New Madibaz rugby coach Andre Tredoux said there had been several aspects of Powell’s presentation that stood out for him.

“Among them was ensuring you train at a higher level than the competition to ensure players can handle the pressure of a match situation,” he said.

“Also the points of building meaningful relationships and making it an enjoyable culture are well made.

“Applying a good culture with common goals is paramount to building a successful student-athlete programme at Madibaz.”

Tennis coach Hennie de Klerk felt Powell provided an authentic outlook in the role of coaching, from which everyone could benefit.

“Neil Powell’s ego is well and truly in check and you appreciate how he places value on respect for others and sets the mindset that avoids mental friction within the group to create the cornerstone for success,” he said.

“Most importantly, he places personal development before winning, showing that manners, respect and discipline are some of the key focus areas to being a successful coach and a successful player.”